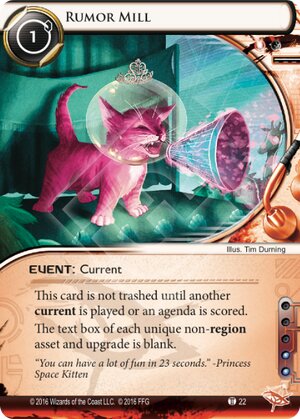 The text box of each unique non-region asset and upgrade is blank.

"You can have a lot of fun in 23 seconds." -Princess Space Kitten
Illustrated by Tim Durning
Decklists with this card

A much hated card, now banned. It may be a little perverse to review a card that's now literally unplayable, but I'd like to offer a brief retrospective. A lot of people said Rumor Mill was badly designed. The argument ran like this: it's a very strong effect with no counter-play. It just shuts down the Corp, no questions asked. I think that's wrong for two reasons. Firstly, Rumor Mill was the counter play. It hated on a relatively small number of cards that happened to be very strong. Hate cards need to be above the curve against then strategies they target or they're worthless. Secondly, there were still options for the Corp. They could play their own current, or find a fast advance to kill it. That's counter play right there. Granted Rumor Mill guaranteed an access past Ash, Caprice or Marcus Batty but that's what never advance is for. There was even a hard counter of sorts, The News Now Hour.

The real problem with Rumor Mill was the context it was printed in. Starting with the Mumbad Cycle, and continuing on through Flashpoint and beyond, the strongest new Corp cards in Netrunner were notably skewed towards asset spam and away from glacier. Horrors like Museum of History, Mumbad City Hall, Mumba Temple and the bloody political assets started this trend, but they weren't the end of it, as deeply unfortunate cards like Friends in High Places and Estelle Moon attest.

Meanwhile, runners became richer and more efficient. The pack that Rumor Mill came in, for instance, upgraded Corroder to Paperclip and also afflicted the meta with Temüjin Contract, the most broken economy card ever printed (that's including Bloo Moose). Smoke and Şifr also both largely invalidated ice in their different ways. All this was bad news for glacier decks. What Rumor Mill did was turn off their last remaining advantage - defensive upgrades. It was a solid kick to the perineum of an already beleaguered archetype. Worst of all, it was the final piece in the Valencia Blackmail spam archetype. Now Val had no need to interact with glacier at all. She just said "no".

The combination of absurdly powerful Runner economy, anti-ice options, and a strong alternative Corp strategy in the form of asset spam, left glacier broken. Rumor Mill was the straw that broke the camel's back. And it was everywhere, because hey, turning off Jackson Howard was always gonna be good. In a different meta, losing the reliability of Ash, Caprice and Marcus might have prompted Corps to explore different options, such as Old Hollywood Grid, but as it was there was really no mood to try out downgraded versions of decks that were already falling behind.

I'd argue that a lot of this situation wasn't really Rumor Mill's fault. You'll note that this review has mentioned a lot of cards that are also now banned or restricted. That's where I'd lay the blame. Caprice and Jackson are now gone. Ash and Marcus are still with us, as is the sleeping giant Sandburg. I don't think it would be awful if Rumor Mill came back in some form to offer a counter to those cards. I realise I'm in a minority here. There's no arguing with the fact that it's strong, so maybe it should be on the restricted list, or reprinted in a weakened form.

(Crimson Dust era)
Greasythumb 372
I never had a big problem with Rumor Mill (one reason being because I hated Caprice). But you are right, RM along with other broken cards killed glaciers and contributed to those stupid asset spam decks (I had basically stopped playing before the new and wonderful changes that were just implemented). I'd be fine with a new iteration of RM. — quailman2101 6 Oct 2017
Honestly I don't think we need another iteration. We already have Political Operative, Councilman, Interdiction and Drive By for similar effects. I agree with you; netrunner was becoming unbearable at the time and Rumour Mill was just one of the pieces pushing negative play experiences and strangling the meta. I also agree that Caprice is a terribly designed card and I'm glad she's also gone. — Rahrhino 8 Nov 2017
6

Want to get all those juicy agendas you know must be in archives, but you know that the second you -look- in that direction your good friend The Toy Boy will appear and stop you? Do you need to get into that four iced ETF server to stop the corp from winning the game, but you just know there's a mean robot and psychic detective right at the bottom, and you've only got one Political Operative? Do you still hate Museum of History, and will always hate it, and god why does that card even exist, I mean se-

Enter Rumor Mill. For one credit, just one, all those problems go away. Jackson can't protect those agendas anymore. Ash and Caprice can't stop all your hard work running into a server with a couple of credits. And Museums of History won't even get rezzed, unless the corp enjoys the idea of painting a big ol' target on one of their most valuable cards. Let's get into specifics:

-It's an event, and more importantly, a current. So unless you use this card at a really inopportune time, you're most likely getting multiple turns out of it. This is absolutely disastrous for the corp. As soon as you put this down, they need to either immediately score or play a current of their own, because if they get agenda flooded, they're screwed. It's something that can easily happen to every corp, and the one card they have (at the time of writing this), cannot help them. Plus, even if they immediately dispel it next turn, since there's no way for a corp to play their own operations on your turn, at least you can go hog wild during the one you put this down, and that's probably enough to do something game-changing.

-It's 2 influence, so you may not see it in every runner deck, but you'll still see it in a lot of them. If you're a Shaper, what would you rather have? One influence spent on a single use PolOp that can kill one thing once (and cost you more money to do so), or spending one more influence to have a card that might theoretically be around for the rest of the game, and will stop many cards from ruining your day? Influence can be tight, it's true, but people will definitely find ways to make it work, because this effect is worth it.

Just a few quick things to note. First, because of the plethora of powerful currents out there on the runner side, corps seem to be more consistently packing at least a current or two of their own, for if nothing else to kill runner currents. So while Rumor Mill could indeed come out on Runner turn one and and stick around until the game is done, that's becoming less and less likely as time goes on. Use it when you need it, not all willy-nilly. Secondly, there is a card coming, and coming soon, called Preemptive Action. It's not exactly the same as Jackson Howard, but it's close enough, and Rumor Mill does nothing to it. I suspect it'll gain widespread usage because of Rumor Mill's existence alone.

Wow, ok, so I guess I'll start by addressing the obvious. This card is nuts for one reason in particular. It stops the Jacksonator. Corps beware! There are now two surprise ways for the runner to nab all the Agendas you've been chucking into archives without you being able to tuck them back into R&D. And this one is much more economical (Rumor Mill costs only one credit whereas Hades Shard costs 7). This is huge and will shake up the game for the foreseeable future. I expect to see this in many runner decks for quite awhile. The mere threat of it forces the corp to start playing a little differently. Corp players will have to start protecting against this card. This might include using Jackson right after discarding, ICEing archives more aggressively, holding onto more agendas in hand, or playing cards like The News Now Hour, Rework, Special Report, or Corporate Shuffle.

But wait! There is much more to this card than just stopping Jackson Howard. At this point, every single unique asset and upgrade is blank when this is in play (to date there are no unique regions). Some of the popular ones are Sandburg, Museum of History, Marcus Batty, Caprice Nisei, Ash 2X3ZB9CY, and Jeeves Model Bioroids.

There are a number or others, most don't see play but you may run into some of them. The executives won't work, but note that they won't go to your score area either if you trash them. Most characters such as Ibrahim Salem and Lily Lockwell no longer function. Then too there are a few upgrades that you run into once in awhile that Rumor Mill stops. This would include The Twins, Ryon Knight, and Keegan Lane.

So basically this is the new runner swiss army knife. It is the real deal. A card like Political Operative can potentially help you if you run into Ash or Caprice. But it takes a bit of a setup, can only be used once, and costs extra money to actually use. Rumor Mill is super cheap, has no prerequisites, stays on the table for awhile at least, and is an answer to many popular corp cards.

Now, will it force Jackson out of corp decks? I don't think so, but I think it may force some long forgotten cards in. At an ultra low play cost of one and only two influence it is going to be popular indeed.