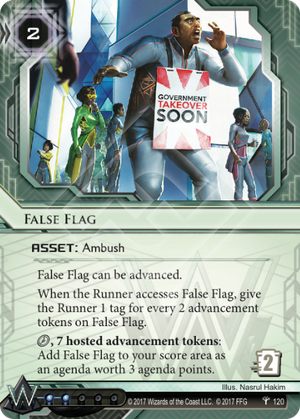 Lengthy review, which is also sort of a response to Drakeheart, but since it is a mouthfull I am posting it separately.

I think this is one of those cards that looks very appealing, especially to newer players, but is a lot worse than it seems. Not garbage, but there is a reason this asset doesn't show up in competitive decks, even though tags are the hot rage.

You have to look at this card in some likely scenarios:

This is a long-winded way of saying, I am not remotely terrified of this card. If you want to spend 3 turns scoring it, have at it. I am gonna snoop in your centrals while you do that. If you as a runner do fear False Flag, Drive By and Political Operative are great counters. Or call their bluff and run it with No One Home or On the Lam installed.

Combos nicely with Prisec and Dedication Ceremony, if you do decide to try it out. 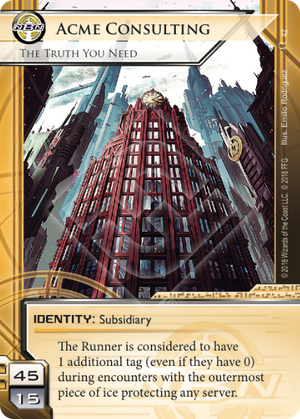 Acme Consulting: The Truth You Need

Writing this from the runner's side... as someone who has had the misfortune of playing against it...

So. I'm going to point out the obvious here... This is a baked in Bandwidth, only without risk of getting broken. This card turns on all those conditional pieces of ICE that NBN love, but are inconsistent... Data Ward and Pachinko being the two that most notably come to mind (UCF has rotated, fortunately). That fact alone made this ID very difficult to deal with. No longer does NBN require these pieces to be positional. Throw a Data Ward in front of your remote, and a Pachinko on your centrals and watch as it will always be cheaper for you to Rez these ICE than it will for me to crack it. Even with Clippy.

And that fact alone, being able to use some of NBNs best pieces of ICE without any further setup, makes me want to grab whatever table I'm playing on and just eat it, cards and all.

"But Drakeheart," your anonymous voice calls out, "It's only the outermost, and one piece of ICE isn't going to keep runners out forever. That's what Bypass is for!"

And this is true. There are a lot of options to fight a deck that only uses a couple pieces of ICE to protect a server. But I wasn't prepared for this ID. And thus, I suffered. Maybe this is me learning how to be a better runner... But this ID made it a sore lesson to learn.

False Flag is unlike any other Advancement Ambush Asset in that it forces the runner to address the threat. Unlike Cerebral Overwriter, Ghost Branch, Neurostasis, or Plan B, which hinge on the Runner actually accessing them, False Flag becomes a 3 Point Agenda.

If we ignore that absolutely massive contingency, False Flag is a worse Ghost Branch. The 2- cost is negligible. 1 tag for every 2 advancement tokens is much less punishing. BUT. If the runner never triggers it. If you build this in a server out of reach from the runner, then you just spent the same amount of effort for a Government Takeover in order to score an agenda that the runner can't steal, and is punished for even trying.

That's it. That's the card. A 9/3 Agenda that reads "The runner cannot steal or host this, and gains tags after trying. The runner can pay 2 to trash this." The latter half of that sentence is the insulting part, because they WILL trash this.

Drakeheart 36
<p>I am curious why you think this is a 9/3? In my mind 7 times advance plus a click to pop it equals a 8/3?</p> — Aterriblesound 3 Apr 2020
<p>Reviewing a card without playing it at least once is asking to be criticized. But the comparison to Ghost Branch doesn't work. Similar to <a href="/en/card/21012">Gene Splicer</a>, this card puts a Runner in a lose-lose scenario. You access it and you die by murder or you don't access it and you lose by points. If you're worried about speed with an 8/3, this is the faction with <a href="/en/card/10017">Dedication Ceremony</a> - they'll be fine. While you're at 4+ points, this is a great way to pressure a Runner.</p> — BlackCherries 3 Apr 2020
<p>@Aterriblesound 7 to advance, plus 2 to rez. @BlackCherries, I suppose that's my frustration with it. The only downside is investment cost, but for an asset that forces the Runner to address it and lose or ignore it and lose, it seems stupidly strong.</p> — Drakeheart 3 Apr 2020
<p>Well, i tell you what: put this card in your Weyland deck and give it the old try. I would be surprised if you come away from these games with the opinion that the card is, in your own words, 'stupidly strong'. It can be used as an effective tool in some situations but in my opinion it is nowhere near the top.</p> — Aterriblesound 4 Apr 2020 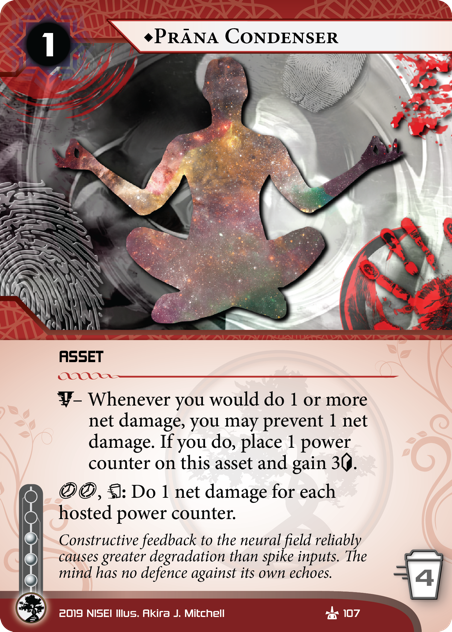 This card is scary, and for good reason. Notice whose branding is at the bottom left corner? Yeah, this belongs in Jinteki for a major reason: Jinteki specializes in dealing massive amounts of net damage to underprepared/unsuspecting Runners. If you're running a Jinteki deck of any sort that focuses on net damage punishment, this is probably a good card to pack. Essentially, you're saving a net damage for later use. That huge line of blue applies here: if the Runner is unfortunate to hit your guard dog or its baby without a killer or credits, you can stack each net damage subroutine onto Prāna Condenser and, if I'm reading this right, gain 3 for each net damage. In other words, hitting a Komainu with a full grip will net the Corp 15.

As for the Runner side, this should be a high-priority target for you. Yes, it's expensive to trash, but 4 instead of a lethal amount of net damage is something you shouldn't spend too much time weighing in on. Unless you have a reliable way to prevent net damage (sorry, the only ones that come to mind for me are Feedback Filter and Guru Davinder), this thing needs to go ASAP. Freedom shouldn't have too much trouble, as well as Imp with a few spare virus counters, but odds are if this thing's hitting the table, you're going to have a very bad time until you get rid of it.

Finally, the flavor text really hits home. If your mind is its own echo chamber, the psychic agony can become unbearable... 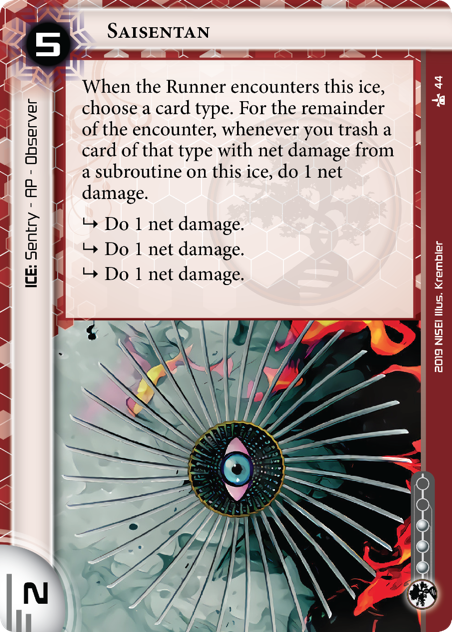 At 2 Strength for 5, Saisentan is an expensive rez, even among other Sentries. It's closest companion is Neural Katana which is 1 more strength, for 1 less to rez, though 2 fewer subroutines. And that difference in subroutines makes all the difference. If Sensei-tan didn't have it's Encounter power, then it's a question of Strength cost vs Break cost

Some notable examples include:

Mimic breaks Katana for 1, vs 3 for Sai-sentence.

GS Shrike M2 breaks both for 4.

Ika breaks Katana for 3 vs 2 for Caeser-Ten; assuming already hosting.

Shiv actually has an easier time with Sailly-senten, requiring only a couple fellow breakers, or even fewer with a bit of boosting to crack all three subs.

The summary is that the credit tax to the runner is roughly the same, favoring Sentai-san only where breaking is more taxing than boosting, typically with static breakers; though I'll leave an in-depth comparison as an exercise for the reader...

But there's a wrinkle in all this I mentioned earlier. Thaisentan isn't actually JUST 3 Net damage. If allowed to fully fire, this card will land up to 6 Net damage. SIX. Realistically, it'll probably only land 4. Only.

Which brings me around to my initial two words. If you can pay for the rez cost, this cards puts an unprepared runner to well within flat-line range. In-Faction, this is a dangerous little Sentry, with a premium price to pay for it's premium package, and at three influence, it's probably not going to see use outside Jinteki, though a few of you will probably prove me wrong.

All this being said, is it worth the slot? From me, it gets a firm Maybe. It's ability and subroutines make it physically painful to move through, and while it's always going to be cheaper for the Runner to crack than for the Corp to rez, it makes an excellent face-blender in the early game. If you can afford the cost early enough to make it worth it, much like another high-rez-to-low-strength Sentry... Well, you're probably not looking to win by scoring.

Drakeheart 36
<p>Great review. I'd love a comparison to <a href="/en/card/08014">Cortex Lock</a>, which is a lot more relevant for today's meta, but this review highlights Saisentan's pros/cons really well.</p> — BlackCherries 1 Apr 2020
<p>Imagine this thing with <a href="/en/card/26107">Prāna Condenser</a>...</p> — Black Hat Madman 2 Apr 2020
<p><a href="/en/card/08014">World's Worst Brain Freeze</a> is another comparable piece of ICE. On it's own, C-Lock is probably one of the best pieces of thorny ICE. At 4 Str with only a 2&lt;span class="icon icon-credit"&gt;&lt;/span&gt; Rez cost, it's an absolute steal, and significantly cheaper to Rez, and much harder to Break than Saisentan. Interestingly, these two pieces of ICE do almost the same thing, or at least, operate on the same level. Both are ICE you want to rez early enough to be useful, both have the potential to do a lot of Net damage; and as a result of these two things, they occupy the same sort of game space. Only Cortex Lock is infinitely more forgiving on the Corp's bank. So when is Cortex Lock more useful than Saisentan? When the Corp's poor. Thanks for coming- What? You need more? Fine. Cortex Lock is useful really only once. It hurts a little less than Saisentan when you stick your face against it, and afterwards the runner gets to decide how dangerous C-Lock is. More programs = less Memory = Less damage; Runners can equip themselves accordingly, with the potential of just walking through entirely. However, a runner will always need to address the damage done by Saisentan, and as such, will either always choose to break, or try and bypass it. Break-cost of Cortex vs Sai is comparable to my earlier comparison, only now swung much more heavily in Cortex's favor, both due to the higher strength, and it's low rez cost. TL;DR: Saisentan is a feisty little Sentry loaded for bear, but wants you to pay for the cost of all it's ammo. It's something a Runner will need to take measures to address.</p> — Drakeheart 2 Apr 2020