Savant has +1 strength for each unused MU. 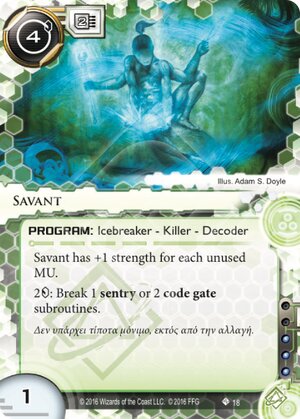 If you're going for the free-MU / Deep Data Mining style Savant is not a bad decoder. Assuming you're at 4 free MU after installation you get a decoder that for breaks 1-2 sub 5-or-less strength codegates for 2 and 3-4 sub for 4 and on top of that can break sentries if you don't have a killer installed yet.

Code gates with more than 5 strength are relatively rare. Just look at the list. On the other hand DNA Tracker is sufficiently nasty and popular that it warrants having a plan against it. That means either having a way to get extra MU (Akamatsu Mem Chip and friends) or having some kind of backup breaker.

Gordian Blade is a lot more flexible in strength though, which is nice when you run into the aforementioned DNA Tracker. Savant on the other hand is effectively a semi-AI, being able to break two types of ice. Sure, the per-sub price on sentries is high but it does give you that warm fuzzy feeling of knowing you can run into a sentry without taking damage, provided your bank account has enough credits (6 should cover most cases).

Because Savant only works well in decks that go heavy on the MU it's a specialty option. But in such decks it should work very well.