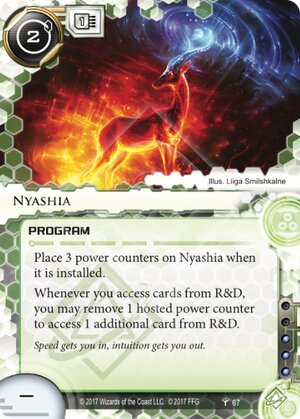 Place 3 power counters on Nyashia when it is installed.

Whenever you access cards from R&D, you may remove 1 hosted power counter to access 1 additional card from R&D.

Speed gets you in, intuition gets you out.
Illustrated by Liiga Smilshkalne
Decklists with this card

At first view, this card seems like the poor man R&D Interface. Half the cost AND it is a program, not an hardware. Those are drawback right?

But there are synergies to get with this. First, like any installable card that has a limited use, it is a prime candidate to become the target of Aesop's Pawnshop. Second, being a program, this is tutorable by Self-modifying Code and Customized Secretary.

In specific type of deck, like those using Customized Secretary and deck using Aesop's Pawnshop, it can be worth it. Making every cards used give you a positive cred gain is nice.

The art is very nice, once you notice it among the saturated colors. Nice quote also.

I just don't understand why it is 3 influences, when R&D Interface is 2.

Note that RDI and Nyashia work off of Divide and Conquer and Mind's Eye, while Maker's Eye cannot be combined with other run events.