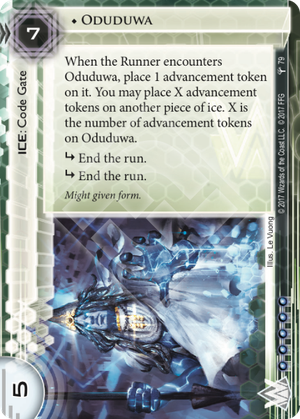 Oh, mighty Oduduwa your time may have finally come! From a card that you maybe think of once in a while and how cool it would be to put one in your decks and surprise your friends when you rezz it to a serious threat. What do i mean by this?

With the release of Uprising the prospects of advancable ICE are looking really good. With the combination of Wall-to-wall and Cayambe grid there is finally an effective way to charge up this ICE before the runner encounters it. Because lets face it: If the runner knows where Oduduwa is located they will be very selective with their runs and avoid this ICE whenever possible. This made sure that there were never enough advancement tokens on it to justify its inclusion. Now you cand effectively load it up with tokens, all with infaction cards.

Gone are the days of jank players trying to import this ICE in Tennin. I think Oduduwa deserves a second look. 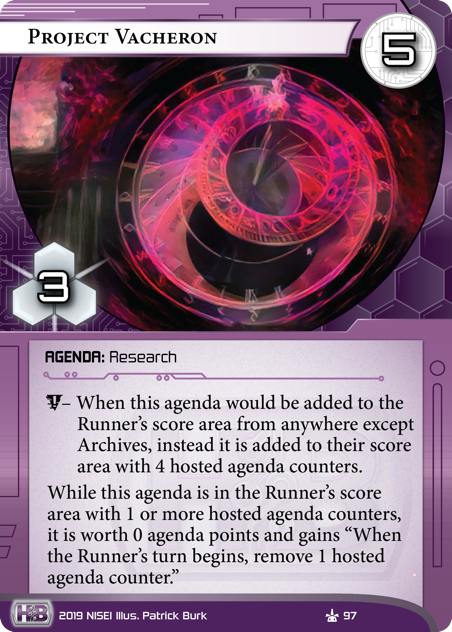 Project Vacheron provides an interesting perspective on the topic of risk managment with scoring windows. Not only do you have to consider now if the runner can steal this agenda but also how far ahead you are so that you might still win even if the runner has theoretically scored all points.

In Sportsmetal this Agenda might be worth the risk to install and feed the runner (drag them through an expensive server first, of course!) while secretly planning your next score from hand already. If they don't take the bait, even better, you just scored 3 points.

This puts an interesting timer on the corp and while it might not be the strongest agenda currently it is certainly fun to play! I think it will see play in agressive corp decks looking to score as fast as possible. 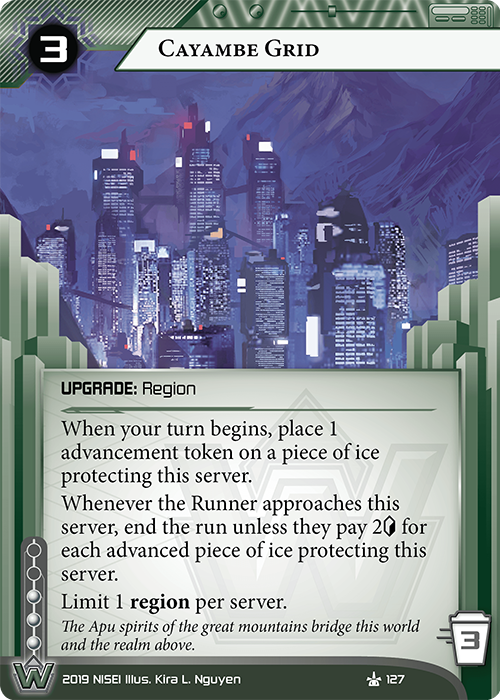 This is an exeptional powerful card, that will define Weyland meta for some time.

BlackCherries Review mentions some of the key points already, so i will add three additional synergies:

1) Wall-to-wall combined with this card can create a very powerful server. Getting two advancement tokens per turn is no joke and at the time of the Uprising release there are many excellent targets in Masvingo, Ice wall, Colossus, Hortum, etc. Combine this with the added cost of the newly released Earth Station ID for running your external server and you will make the runner think very hard about that run.

2) Building on the first point: Charge up your Oduduwa before the runner encounters it for the first time and watch the runners brain explode as you put a boatload of advancement tokens on another ICE. And it even ends the run! If you are running an advancable ICE package anyway you will have no trouble finding targets. I have encountered a colossus with double digit advancement tokens in our meta already.

3) Border Control. This one just hurts my soul... From my understanding you can end the run with Border Control even after the Runner has paid the Cayambe Grid Fee, making them run the server again, MAKING THEM PAY FOR CAYAMBE GRID AGAIN! (Bonus points for another Oduduwa encounter)

So all in all i think this grid supports the new Weyland ID really well and will strangely probably lead to more advancable ICE being played, something FFG has tried very hard to accomplish in the past. See you on the MWL! 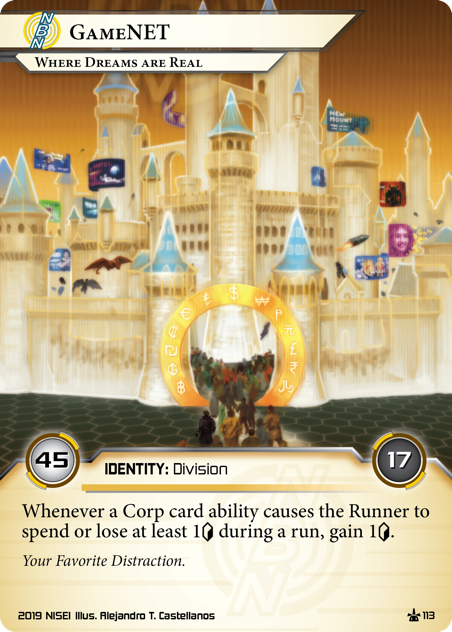 GameNET: Where Dreams are Real

For anyone who thinks GameNET is a bit underpowered, slot Shipment from Tennin in. GameNET's strength isn't in it's infinite economy, it's in its ability to be paid for something that's going to happen anyway. So you want to make sure that something happens as quickly and as frequently as possible. Glacier isn't the way to go with GameNET and its 17 influence, Fast Advance is.

As much as I gush about MCA Austerity Policy, it's too slow for GameNET and doesn't force enough runs. CalTest and BassC are both out for the same reasons. You don't want to create a single target that turns off the Corp's FA, you want to threaten from as many avenues as possible. You want Operations since those can't be trashed normally and force the Runner to check HQ, R&D, and remote for agenda. Remastered Edition is worth a mention for being an agenda that advances the train. FA works because GameNET gets paid while the Runner works to stop the FA train, eliminating one of the biggest weaknesses of FA. The fact that GameNET's ICE suite makes repeated runs especially painful is just icing on the cake.

The main go-to's then are the above mentioned Tennin and Biotic Labor with Tennin being the clear instaslot. Trick of Light works if you can tolerate the added steps and so does Audacity if you think a deck is robust enough for it. Maybe slot in some recursion for the long haul as well.

All in all, I'd argue that GameNET is not only NBN's best FA ID but one of Netrunner's best FA ID's, period. Agree or disagree, glhf mtbmw. 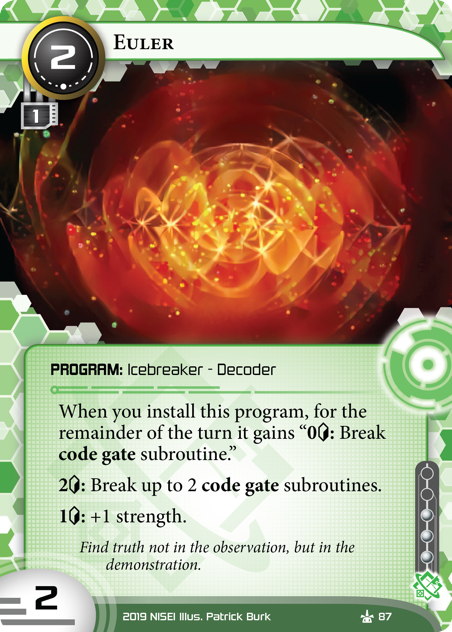 Oh Euler, how do I love thee? Let me count the ways.

With my lost saints. I love thee with the breath,
Smiles, tears, of all my runs; and, if Corp choose,
I shall but love thee better after flatline.