The electric pulses ripped through the Net, backtracking Los's location. When they hit his defenses, they spent themselves against the slope.
Criminal • Yog Joshi • Crimson Dust 105
All sets:
Links: Decklists | ANCUR 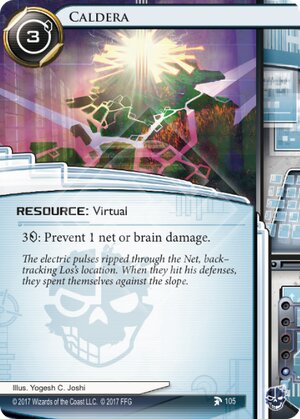 I am kind of surprised this card has no review yet. Let's change that.

Preventing a flatline has been relevant to runners ever since the core set, and this has not changed in the past few years. Jinteki PE and PU are still very strong factions who can make the runner shit bricks as they lose cards left and right. And now, with the recent restriction of Levy AR Lab Access, they are more vulnerable than ever. No more including a single Levy as a silver bullet, if you want to recycle your deck you have to commit to it.

Luckily we still have Feedback Filter, a card that will likely never rotate, and now there is Caldera. The two are actually very similar and I will review Caldera while comparing it to FF.

Caldera lets you prevent 1 net damage for 3 credits, as often as you want per turn, exactly like FF does. This is a hefty cost and not something most runners will be able to pay consistently. Either they need to be very rich or have reliable drip econ, or both. But for those that can afford it, this effect neuters the Jinteki match up. While meat damage tends to act like a bludgeon and hits hard in one go, net damage pings you over the course of a game. If you have the economy to match the cost, you are essentially unkillable.

Caldera ALSO can prevent 1 brain damage for 3 credits while FF has to trash itself to prevent 2 brain damage (for free). If you happen to run into a Cerebral Overwriter, something Jinteki decks sometimes slot, you can just negate that damage as well in exchange for cold, hard cash.

One thing to consider is the different card types. FF is hardware, Caldera is a resource. Hardware is relatively hard to trash, except that there is a trap which Jinteki has been looking into recently which can set you back immensely. No such trap exists for resources. But of course, resources can be trashed if they happen to make a tag stick. Like when you run last click and hit a Snare!. Seriously, don't run last click against Jinteki... There is also Voter Intimidation to consider.

Lastly, Caldera is a criminal card while FF is a shaper card, but as both cards only cost a single influence, they are easily splashed in any deck. And FF is one credit cheaper. But hey, you are likely a filthy rich runner if you are considering this card, so who cares about that anyway?