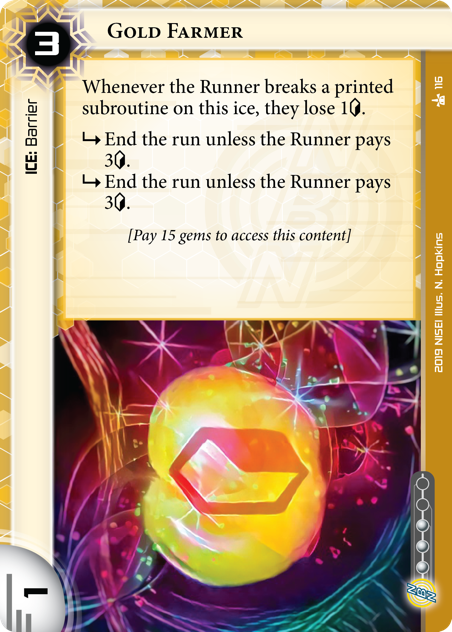 I would like clarification on the text of this card. If an icebreaker would break 2 subroutines at once, does "When the Runner breaks a printed subroutine on this ice, they lose 1credit" fire one time or two times? 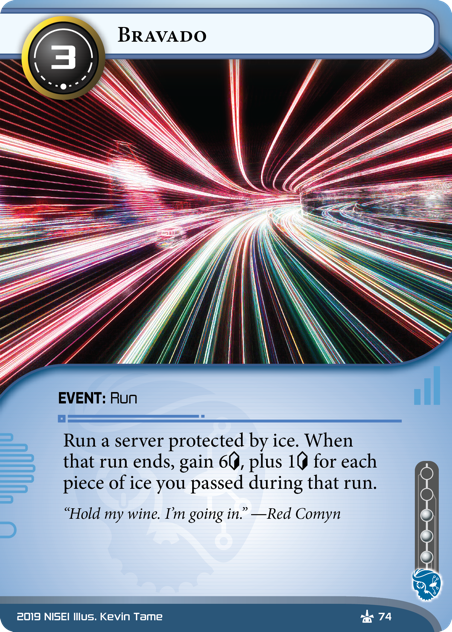 Use it to Face Check. Just use it.

When runner uses this card like Normal-Boring Dirty Laundry, I'm calm, indifferent. They just get what they supposed to get.

But what if they use it on turn 1? Annoying, annoying as hell. This card will teach you why Face-Checking is good play.

Maybe I should put more Cortex Lock in my Jintekis. 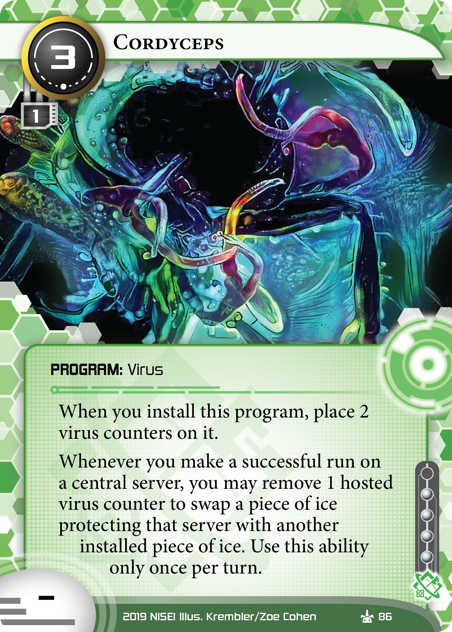 This card reminds me a lot of Escher. It cant re arrange the whole board like Escher, but it doesn't take the slot for run events, and can be combed with other run events or run effects. We can just move all the Corp's cheap ice to R&D as we Stargate them into oblivion. 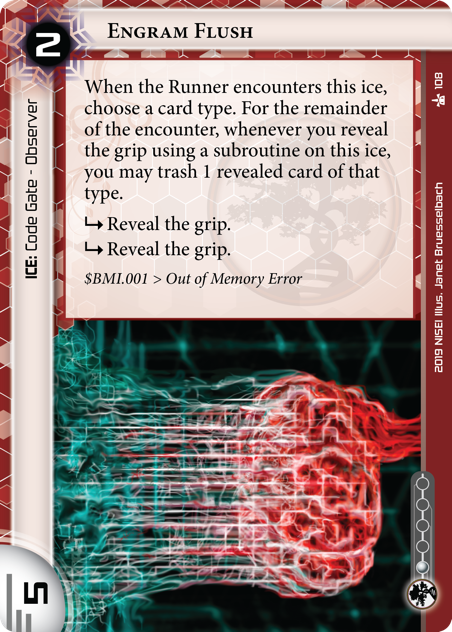 Engram Flush, like Slot Machine, is a cheap to rez but taxing to break code gate with unassuming subroutines. Slot Machine is great, and I'll compare Engram Flush to it to get some sense of how good this new code gate is. Incidentally, both reveal runner cards, and thus can give Hyoubu Institute a credit.

2 for a strength 5 code gate with two subroutines is a fantastic deal if the runner breaks those subroutines. If they don't, they're liable to lose a card or two provided you have a read or knowledge on what they're holding, which you're likely to have in Hyoubu or Chronos Protocol. You can hunt down any I've Had Worse the runner might be holding for your damaging ice by naming Event, and in general the ability to pluck chosen cards out of the runner's grip is already what Chronos Protocol decks are going for.

Both Engram Flush and Slot Machine are somewhat liable to misfire and won't always be as powerful. In Slot Machine's case, it depends on the top cards of the runner's stack, but at minimum you will cost the runner 3 even if their stack is empty or they blank its encounter effect. Engram Flush on the other hand can be walked through with an empty grip, although that's probably a bad idea against Jinteki. Engram Flush will also do almost nothing against Hunting Grounds or if you just name the wrong type with the encounter effect, which the runner will know before they choose to break or not.

I think you probably have to really be taking advantage having existing knowledge of the runner's grip to make Engram Flush good enough. It's less reliable than Slot Machine, although it is a whole credit cheaper which is a big deal at such a low cost. My prediction is that this card is good enough for Hyoubu Institute and Chronos Protocol, and maybe Harishchandra Ent. at a push, but its going to be a tough sell for any other corp. 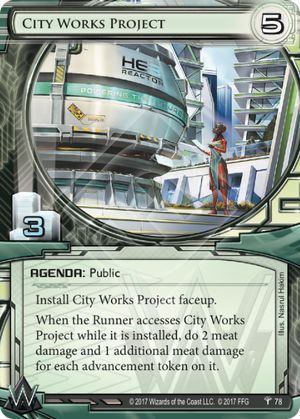 This doesn't have any reviews yet?? Okay, I'll do one!

I don't know how to do these really, so I won't link to anything else or say anything insightful, but this agenda is one of my favourites in the game. Public agendas occupy a weird place in Netrunner, and it's one I love. Some are fantastic, like Oaktown or Hollywood Renovations. And some are just annoying, like New Construction or Underway Renovation (even though I secretly quite like Underway...) In my view, City Works absolutely fits in to the former group!

Outside of Oaktown, City Works is the easiest public agenda to take advantage of. Meat damage is Weyland's thing, and one of the big pushes for Kitara seemed to be trying to make meat damage work in a way not dependent on tags as it frequently was in Scorched times, but rather on interaction - or lack of. City Works does damage on access, whereas Urban Renewal, also in Kitara, did damage after several turns if it wasn't trashed. I think this card achieves this aim really well!!! And is certainly a more positive play experience than Urban Renewal.

City Works is strong. It does 2 meat damage, plus 1 extra for each advancement, so it's frequently costing the runner 4-5 cards to steal. Follow this up with Punitive, or even just the threat of Punitive, and you can really put the runner is a bad place! (Death. Death is that bad place!) It can also be combined with cards like Dedication or the new Argus Crackdown lockdown to increase counters on City Works or do extra damage. Even with no Punitive to follow up, costing the runner 4-5 cards is a fairly strong effect compared to other 3-pointers.

The main criticisms of this card are: it folds to Film Critic, which sure, and it doesn't do anything if accessed from a central. The card would of course be stronger if it did 2 damage regardless, but it is certainly not a deal-breaker. This card is good!

Where this card really becomes one of the best agendas in Netrunner is with a certain identity. The best identity. A Kitara identity that was released alongside City Works in the same data pack. Coincidentally, my FIRST data pack I ever bought! (It also had Rashida in... eh, they can't all be perfect) SSO works off of face up agendas! It uses the agenda points on installed face up agendas to place advancement counters, and, in SSO, City Works becomes a behemoth! If they run and steal, they take damage and you have the threat of Punitive. If the runner sits back, you charge up your huge servers and slowly score it!

City Works is such a fantastic card in the right gameplan. Still, it's not an agenda that should be thrown in a Weyland deck that just needs a few more points. Without a strategy, it can just be easy points for your opponent.

Play SSO! It's great. I should do a review of that card next... And Hollywood Renovation... And Mass Commercialisation...

I Am Jessica 122
Good review — Cpt_nice 24 Dec 2019
<p>I have always liked the flavor. All the public agendas do things as advanced, because the corp can progress them in broad daylight, whether it's burning out all the runner's friends from the underway, or gentrifying old Oaktown. Here, in Africa, SSO, after losing the space elevator bid, is making He3 reactors for affordable power. So, instead of it doing things right away in increments, what builds is the public backlash when the runner wrecks it. I like to imagine the runner just booking it through the savannah, flying jeeps filled with angry villagers a scant mile behind, hahaha.</p> — lp87 8 Jan 2020