Whenever you access a card with a trash cost not in Archives and do not trash it, you may reveal it and gain 1credit. 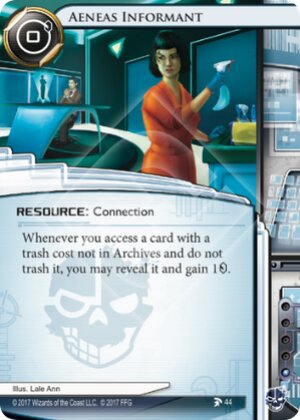 A really powerful card and I suspect one of the main reasons MCA Informant exists.

What the informant does is make runs on assets without trashing them make credits. If you only have one informant that's simply a trade of a click for a credit. If you have two (or one and a Desperado) it's 2 per click, Magnum Opus territory. If you have all three out you generate a whopping 3 per run. Add Desperado and you can get up to 4. Add Temüjin Contract and things become really insane.

This does rely however on the corp having easy-to-access (read: unprotected) assets. That means Aeneas Informant is at its best against asset spam decks. If only those were popular...

Other decks do frequently run PAD Campaign as well though and even if the corp ices all their PAD Campaigns that probably makes it worth including 3 Aeneas Informants in our deck since it means the corp won't be able to put as much ice on other servers.

But Aeneas Informant doesn't simply work on naked remotes. As a bonus it also kicks in when you dig through R&D or HQ. If a Legwork is unsuccessful at finding agendas but does see some assets Aeneas Informants let you get some of your money back, provided you don't trash the assets.

At 1 influence shapers can get their own informants as well, which can be useful in an R&D dig. Just remember that you have to reveal a card to get the credit and thus give the corp some information about what's coming up for them.

From a corp perspective Aeneas Informant is not all that easy to counter without the right cards. MCA Informant is an obvious and very effective silver bullet. Best Defense simply works as well.

(Earth's Scion era)
Silv 308
A good counter is to not play asset spam. If you play asset spam, this card will become at least a repeatable security testing. — Myriad 26 May 2017
It's not that simple. Unprotected assets are common in many non-asset-spam decks as well. Basic things like PAD Campaigns that rely mostly on their trash cost to avoid being trashed. — Silv 27 May 2017
Aeneas also works really well with the Gang Sign HQI combo that a lot of Leela decks use. This card is a really big deal. Huge hit to asset spam. — Waltzard 27 May 2017
1

Really interesting interaction with a heavily built Medium on a weakish R&D. In a dream scenario you have 3 Aeneas Informant and let's say 4 Medium virus counters. You can re-run R&D and access ~12 credits of cards per run (depending on what you see). A bit janky and hard to setup, but with enough support (like Hyperdriver) it could be a fun thing to try. Any multi-access will do of course, such as Nerve Agent.

If he's saying that using slums = trashing a card, then he's changing those interactions.

Unless I'm misunderstanding something, this UFAQ reads like either boggs messed up here and it should proc, or he unintentionally changed the effect of slums on hostile infrastructure and CtM....

(Earth's Scion era)
Snake Eyes 4619
The card is always trashed. — lordofthetoasters 14 Jun 2017
The card is always trashed. Things that check whether cards were trashed or not need to know if it went to Archives/Heap to trigger. Things that check whether cards weren't trashed only need to know if it left play. — lordofthetoasters 14 Jun 2017
Thank you for that clarification @lordofthetoasters. I was unsure of why certain cards worked with Slums and certain cards didn't. — quailman2101 14 Jun 2017
Actually while functionally identical the explanation is not correct. What happens is this: Hostile and CtM do trigger at the same spot as Salsette Slums. Specifically at the time one pays the trash cost. Salsette procs first because it's the runners turn and then the card is removed from the game instead of trashed. Since it is no longer being trashed and it never got trashed the triggers for Hostile and CtM are no longer valid so their effect fails. This works exactly the same way as film critic and agendas or femme and tollbooth. Now the trigger for Maw and Aeneas happens at a different time. It happens after the "window" the player has to pay a trash cost. But since the card was removed before then it is no longer accessed, so Maw and Aeneas no longer trigger. This is also why Salsette counts as the "first time" for CtM (because the trigger was met but then failed to resolve) but not for Maw (since the trigger was never met in the first place). — porfyalum 26 Jun 2017