Make a run on HQ. If successful, access 2 additional cards from HQ.

"I work by referral only, with an up-front fee. The fee is reasonable if you value results." -Silhouette
Criminal • Gong Studios • Honor and Profit 35
All sets:
Links: Decklists | ANCUR 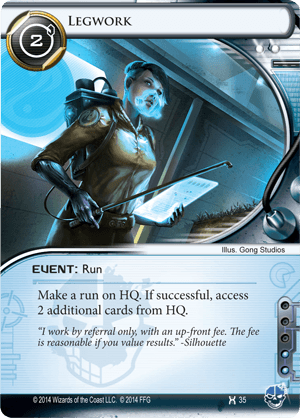 (Data and Destiny era)
Zanc 92
I actually think a better time is when the Corp is sitting on 3 or fewer cards and you suspect they're holding agendas. If you're able to hit HQ twice in one turn, the Utopia Shard - Legwork - Archives combo can be strong in the early game. — GrantZilla1979 29 Dec 2015
One upside of HQ Interface over Legwork is that it works even during Sneakdoor Beta runs. — Blackhaven 20 Feb 2019
Although, every piece of ICE that goes to Archives because of Sneakdoor probably makes the Legwork runs that much cheaper. — Blackhaven 20 Feb 2019