Search your stack for a connection, reveal it, and add it to your grip. You may install that connection (paying its install cost). Shuffle your stack. 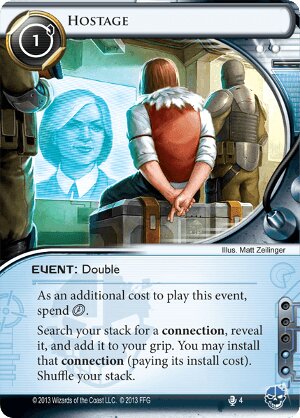 But do you need to tutor for connections? There are two main types of decks that want Hostage: decks which run a toolbox of many different connections, and tutor out exactly what they need (ex: Ian's Creepy Sleepover), and combo decks that splash a single high-influence target which they absolutely need to find (ex: Faust Theory).

The first sort of deck is typically criminal, due to influence Considerations. In these decks, Hostage justifies its deck slots fairly quickly. Would you run 3x Kati Jones? Hostage lets you cut two of those, while still finding her just as quickly. Any further connections in your deck turns this into almost pure upside. Donut Taganes? Jak Sinclair? The Helpful AI? The Source? Mr. Li? You'll be out 1c, and the click you used to draw Hostage, but you make that up by saving influence and minimizing dead draws later in the game.

So all Criminal decks with enough targets should run Hostage, right?

Redundancy can be good. If you're worried about rebuilding after The All-Seeing I, or having your Film Critic Snatch and Grabbed, you might forgo Hostage and make up with redundancy.

The other reason to hesitate is Hostage's anti-synergy with The Supplier. Not that you can't run them together in the same deck, but the opportunity cost of playing Hostage, versus drawing and hosting your connections, does become greater.

The second sort of deck does not yet have much diversity. There are not many connections with influence >2, with Theophilius Bagbiter and Woman in the Red Dress being the most plausible targets. There are a few other potential choices for criminal decks, with The Source being the most obvious potential combo piece for which you might want to save influence.

A small number of decks take a hybrid approach: they use splash Hostage as copies 2-3 of another key 2 influence splash, and gain value by being able to tutor their Kati or other utility connections once they've found their main target. Examples: With Donuts, ProCo, and Helpful AI/Underworld Contacts

(Data and Destiny era)
RS14 5
Its not good as a strict card replacement for influence in Criminal. Every time you draw a Hostage you still have to pay 1 plus the double play cost to have effectively drawn the card. Its even worse if you only have one or two targets, meaning that every other hostage you draw is just damage filler. — PentagonJR 26 Nov 2015