♦ Woman in the Red Dress

When your turn begins, reveal the top card of R&D. The Corp may draw that card. 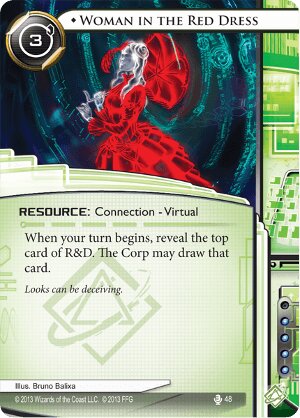 If there was ever a flavour text that summed up a card perfectly, Woman in the Red Dress would be a strong contender.

When it was first released back in Mala Tempora, I pretty much took one look at it and said 'it's a worse Deep Thought, which I also never play'. Combined with a non-trivial cost and the joint-highest influence cost for a resource, it seemed like Shaper had better options, and everyone else had better things to spend that much influence on.

A fair bit of time has passed since then, and I have to admit that I was wrong about this card. There's a subtle power to it, all relating to the flow of information and changes in probability.

Netrunner is an asymmetric card game, and the Corp is basically holding all the hidden information. Almost everything they play is face down, and you do not know the cards in their hand or the order of their deck. Let's assume a simplistic case of 49 cards, 10 agendas. That gives every card a 20.4% chance of being an agenda. So one access gives you a 20.4% chance, a double access is 36.6%, and a triple-access run gives 49.6% of pulling at least one agenda.

Woman in the Red Dress has a number of options that can trigger. The simplest is an agenda appears on R&D, and they do not draw; you now have a 100% chance of hitting an agenda if you run R&D, barring a Jackson Howard reshuffle. But more than that, you have to consider why they didn't draw it; agenda flood, perhaps?

If they get a non-agenda card, drawing it slightly improves your chances of hitting an agenda in R&D, and not drawing it is the least negative choice for the corp. Generally they'll draw them, but don't feel that this forces you to run R&D.

The most misunderstood choice is when there is an agenda and the Corp chooses to draw it. Whilst this is basically the lesser of two evils for them, it is a fantastic opportunity for you, the runner. Previously, there was a hand of 5 unknowns, and now there are 5 unknowns and 1 certainty. This significantly shifts the maths, particularly for multi-access. 20.4 becomes 33.6% for the single, 36.6 becomes 57.8% for 2 access, and 49.6 becomes a whopping 83% to hit at least one agenda for the Legwork run.

And those are the numbers without factoring in the way the game often plays; Agendas will often accumulate in hand, particularly if there is significant remote pressure or if FA is being played.

The other facet of it is, of course, information. There are a number of 'giveaway' cards in Netrunner for the Corps, and a number of extremely unpleasant surprises. Seeing Biotic Labor, Midseason Replacements, or Scorched Earth will immediately clue you in to the deck. Seeing Archer or a Komainu, particularly as a splash, gives you time to prepare.

Because of the way it affects the statistics, it is a card well suited to decks that make limited numbers of powerful runs, as opposed to those that make numerous single-access runs. But even in those, it has a place, as it helps tell you where it would be more profitable to run.

Tl;dr: Knowledge is power, and in the game of 'find-the-agenda', knowing where an agenda is hiding is incredibly powerful

(Breaker Bay era)
Jashay 697
This damn card has always suffered from 46th card syndrome for me. Like...I desperately want to add it, but I want to have other win cons. Solid review there, and enjoyed actually looking at the numbers! — Softman25 27 May 2015
I love this card and ran it in my cetnral-server-focused Kate deck for a long time. I am glad to see it get its due on here. — 4dd150n 27 May 2015
Fisk loves it. Don't want to draw the card? well you're gonna draw it anyway. 4 influence isn't that harsh where all you need is 1 copy plus some Hostages — Kroen 28 May 2015
3

I love this card, I really do. I think if it were 2 influence I'd be much more inclined to take it out of faction.

There's not a lot I can say about how the card works that hasn't already been said by Jashay's excellent review below.

The problem with it is that it's a card that really only synergises with certain IDs: basically those that thrive on one or two big runs a turn. I'm going to separate the runners here in to three categories: Good Synergy, Some Synergy, No Synergy. I don't think there's any runners where it is explicitly anti-synergistic, but there are definitely some where the influence cost is way too high coughIaincough.

(Chrome City era)
Shiiuga 1199
Geist has a finite number of breaks with cloud breakers, this could help skew the math so you make runs in your favor. — Delrian 5 Mar 2016
Really stupid question that just came up, does the corp get to see the card? From the posts here, yes. The question I guess is does revel = expose? One of those terminology oddity's ? — buzard 2 Nov 2016
Feels like 'reveal' would be to avoid attachment of 'expose' traps like Psychic Field, or prevention effects like Zaibatsu Loyalty or Underway Grid. — bigfleet 2 Jan 2017
I don't agree with the no synergy for Santiago/Silhoette. Generally pointed at HQ, yes. So that means you'd like to know when it's a good idea to run RnD. And if they draw the agenda? Well, you were going to HQ anyways. — LemLuthor 27 Nov 2017