Reduce the cost to install Jak Sinclair by 1 for each link you have.

When your turn begins, you may make a run. You cannot use programs during this run. 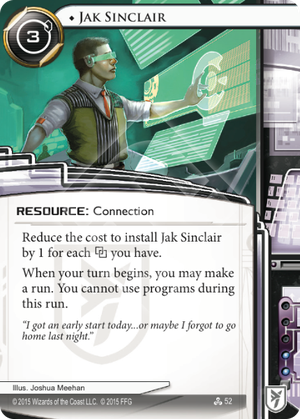 A card that is both surprisingly powerful, and weirdly limited.

A free run every turn is almost as good as a free click every turn! But not being able to use programs during that run limits it a lot. You can pick up some of that slack through things like Always Be Running, or Sunny's own Security Nexus. But in general it's hard to get into too much mischief with this.

On the other hand though, it is pretty good for checking unprotected remotes.

And it is downright fantastic for triggering successful run effects. If they leave ANY server unprotected, a few things you can do:

And of course, a lot of these can be stacked. Who knows, maybe Jak will help bring back the old criminal agro decks of yore!

(Data and Destiny era)
Bwob 436
I once had a game against Jinteki: Replicating Perfection where I was using him for running on a central server at the start of turn and after that running a remote with Sundew installed as first click action. — Krams 10 Nov 2015
I don't think you would get Datasucker tokens or Medium either because they are programs and you cannot use programs during this run. — Drakos 10 Nov 2015
@Drakos, it's been clarified that "using" a program refers to activating paid abilities (like those on on icebreakers), or optional abilities such as #Snitch's "may" expose/jack out effects. Mandatory effects, such as adding counters to #Medium or #Datasucker, will still fire. — Nacobs 10 Nov 2015
I hadn't even thought of the Three Steps Ahead combo that's amazing — notrocketscience 10 Nov 2015
Jak also combines nicely with DDoS if the corp only has a single piece of ice protecting a server. — YourGo 10 Nov 2015
@Nacobs They've changed that then cos when wendigo came out they said it stops you getting counters but not accessing cards looks like they've swapped this around for this card. — Pinkwarrior 28 Nov 2015
Jak can't use Always Be Running to break subroutines, because ABR's first clause prevents it. — Toper 31 Dec 2015
I don't see how Jak and Always Be Running interact with each other in any way. It's not paragraph 1 on Jak. Paragraph 2a on Jak gives you a free run without using any of your standard 4 actions on it so also not that. Also not paragraph 2b because ABR is not a program. It's not paragraph 1 on ABR because Jak isn't forcing you to do something with action 1. It's not paragraph 2 on ABR either because there isn't any kind of restriction. Basically, it looks like there is zero interaction here. — Raiddinn 12 May 2016
I think Toper is right: You can't spend your first click activating ABR's second ability because ABR's first ability says you must spend it on a run or run event. So since you haven't spent a click yet, you're not actually allowed to spend any of your clicks on ANYTHING during the Jak run (since that's spending your first click on something that's not making a run or playing a run event, and thus in violation of ABR's first paragraph). This also means you can't click through bioroids on the Jak run if you have ABR out. — LordRandomness 9 Jun 2016