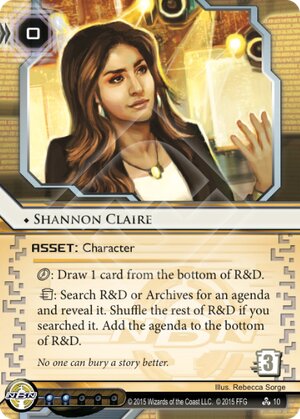 trash: Search R&D or Archives for an agenda and reveal it. Shuffle the rest of R&D if you searched it. Add the agenda to the bottom of R&D.

No one can bury a story better.
Illustrated by Rebecca Sorge
Decklists with this card

(Data and Destiny era)
JohnnyMilton 1038
I'd also add that she combos with Daily Business Show if you actually want both cards you draw. Overall, she looks like a less powerful Jackson Howard, but with the addition of a much safer Agenda stashing ability. — bubbathegoat 6 Nov 2015
There is also the possibility of completely negating an R&D-lock by consistently drawing from the bottom! — Capstone 6 Nov 2015
@Capstone Oh my god! You're right! — JohnnyMilton 6 Nov 2015
@bubbathegoat That's neat, I wonder if there'll be any other "add card to the bottom of R&D" abilities that'll synergise with this. — JohnnyMilton 6 Nov 2015
Reason #7. She's a foxy lady (also unlike Jackson) — Bigguyforyou518 6 Nov 2015
If Shannon ever becomes a big deal, perhaps after being rotated out, then Showing Off might become a one of in Anarch decks. — WayneMcPain 6 Nov 2015
@Capstone The corp can't use this card to negate R&D lock without something to stop the mandatory draw at the start of the corp's turn. — bubbathegoat 6 Nov 2015
@bubbathegoat I understood RnD lock to be when the runner sees every card you would draw before you, thus knowing exactly what you will have in hand. This DOES negate that, because you are drawing from the bottom, thus pulling cards in hand that the runner doesn't know anything about. — Sabin76 6 Nov 2015
@Sabin76 but the runner would still at lest know your mandatory draw unless you used her trash ability to shuffle. — codychilton13 27 Jun 2017
3

So, here she will survive the rotation when Jackson Howard, in the end will leave us (praise Jackson Howard). It seems that it's worse than Jackson since her ability is not that useful as draw twice. And she can only bury one agenda.

Also it's worth mention that you can also look for the agenda to bury (in case of Government Takeover or Vanity Project) but I haven't played yet in that case.

But you don't have to remove her from the game, you just have to trash her. So you can recycle her. Something that our Holy Jackson Howard can't do. And who can install stuff easily from the archives? Of course. Cricks. And the Interns, but Interns have better uses.

And also, as other commented the place where you're buring the agendas is the best place where you can bury them. Even if there is a shuffle or R&D, until that happen, it's almost impossible to go for them. (Exceptions, Showing Off which is never played or Maya, which can bury more stuff but needs already tons of accesses, but it's worth mention)

So even if she needs more influence, she may be useful in decks that are already recycling stuff from the archives. She's still weak against Rumor Mill but nobody's perfect.

(Escalation era)
valerian32 110
I HOPE she's not meant to fill in for Jackson Howard, because the JH replacement should be neutral this time damnit. — NoSoup4you 27 Oct 2016
Preemptive Action comes out in the next data-pack, a neutral operation. — quailman2101 27 Oct 2016
I'd say Shannon feels a lot more balanced than ol' Jackoff Coward. You can't ditch your agendas into Archives with complete impunity, but still got a narrow margin of error. — H0tl1ne 27 Oct 2016
There are several options to fill the Jackson Howard. None of them as powerful but in different factions and tastes. Preemptive Action is one of them. — valerian32 28 Oct 2016
1

My main concern with this card is that to make use of the agenda searching option, you need to have 2 available, as trashing to search puts the agenda on the bottom, then you need another copy of her out to draw from the bottom of the deck. Unless of course you have a way to bring her back from the archives to re-install. Aside from cards which give benefits when things are installed (Turtlebacks/NEH etc) I feel that fast track is better.

Or am I missing something with this that I haven't realized?

(Data and Destiny era)
lomar4976 2
Unless the runner is running Showing Off, sitting on the very bottom of R&D is pretty much the safest place an agenda can be in - unless you're looking to shuffle in the future. So, there might be some value as a niche way to hide one agenda. — enk 6 Nov 2015
Just hide this Goverment Takeover on the bottom and be done with it. — chom 6 Nov 2015
She can also help you dig for stuff through an R&D-lock. Let's say you need options, but your opponent has R&D under lock and key. You're in a situation where you need to draw, but if you do, you let the runner access more cards. Here, Shannon can get you options while keeping R&D stagnant. — HolyMackerel 6 Nov 2015
If you were looking for agenda tutoring you'd just use Fast Track anyway. — TempestRime 17 Nov 2015
0

As of Blood and Water, you can do many fun things with Shannon Claire.