The rez cost of ice protecting this server is lowered by 2. 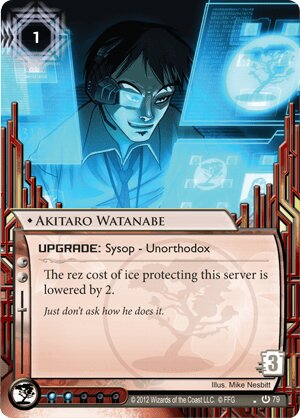 One rez cost to save two on a piece of ICE - that means it automatically is saving you a credit on the first piece of ICE he is used on. A three trash cost is a little difficult for the runner to trash, but if timed right it won't matter for the corp. If two or even three pieces of ICE are rezed in a single run with Akitaro in that server, he more than paid for himself and saved the corp a lot of money.

The major drawback is that he is limited to a single server. As Clot comes into its own and the meta shifts around it Akitaro could see a use. While he never really saw much play, bigger, more expensive ICE is becoming more popular, and although the economy can keep up, saving money would never hurt. The question becomes is he worth a deck slot over another upgrade, in the already tight corp decks?

Ok, so Akitaro Watanabe is clearly an Economy card, and as such, how much money he makes/saves you must be compared to the output of other cards that you might play instead of him.

1 Ice Rezzed: +1, but since it cost a to install, you might as well have clicked for a credit.

2 Ice Rezzed: +3, like a Beanstalk Royalties that requires an extra credit to fire.

3 Ice Rezzed: +5, now installing him is comparable to a Restructure, that has the cost to play spread out over the ice you've rezzed.

4 Ice Rezzed: +7, this is starting to get ridiculous, but at this point you must have spent 6 just installing ice protecting this server, which must be considered.

On top of the comparison to economy operations, you must of course consider that the runner may choose to trash him, which though it may stop you from lowering the cost of more ice, the cost to the runner must be accounted for as well.

Unfortunately, as optimistic as the above analysis might start looking, you have to consider that he is only really that useful if drawn early in the game, before you've rezzed most of your ice, whereas economy operations can still be useful as the game progresses. Furthermore, if you have a full 3 copies in your deck, to ensure that you draw him early; then the other copies in your deck that are drawn late, are still effectively useless.

Though in theory Akitaro Watanabe could save you quite a lot of credits, he is difficult to make good use of.

Perhaps once there are enough good Sysops for Jinteki's Recruiting Trip to be useful, Akitaro will have his day, but until then, you're probably better off with a PAD Campaign, or perhaps even a Medical Research Fundraiser.

(Data and Destiny era)
Quarg 249
The only ICE that currently has a real synergy with him is Chimera. (And Cell Portal, but it's nearly unplayable.) Rezzing _the same_ ICE over and over again for reduced rez costs saves you money without adding absurd install costs. Still, it's not enough to really build for it. — Krams 10 Dec 2015
This is nice to have if you play against Nasir a lot I imagine. Plays nice with Amazon Industrial Grid if you have really really high cost ice. Pairs well with with Eden Fragment. — jdharper 10 Dec 2015
Your math is off with 4 ICE rezzed. The install costs total to 6, not 10. The 4th ICE is 3 credits. — enk 11 Dec 2015
The Chimera combo is surprisingly robust early in the game. It can make for a cheap, safe early remote against most Runners, which can be used to leverage economy assets or score some quick points. That said, this is only a good idea if you're ALSO going deep on single server ICE, because having him be useless later in the game isn't worth the deck slot. — LordRandomness 17 Jan 2016