Whenever there is a successful run on this server, trace [5]– if successful, give the Runner 1 tag. If unsuccessful, trash Bernice Mai.

Keeping tabs on the world, one screen at a time.
NBN • Erfan Fajar • Humanity's Shadow 97
All sets:
Links: Decklists | ANCUR 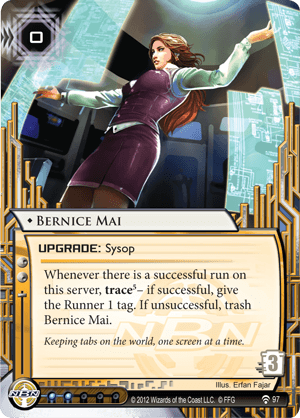 Why ? Certainly because it’s cheaper and less conditional. It offers a nice surprise tax to the Runner, as they have to reach the quite powerful trace to avoid the tag and get rid of her as soon. If they can't, they will hardly be able to trash her and remove the tag in the same turn, since for a link-less Runner, both of this options costs the same price (bare the click).

By the way, she doesn’t see much more play than ChiLo, certainly for the same reasons :

On a side note unrelated the game, she reminds me a pretty IT-girl working in the office next of mine. Not that they resemble so much, but I like to think of my co-worker as "the Bernice Mai of my company". She never gives me tag, tough.