Whenever there is a successful trace during a run on this server, give the Runner 1 tag. 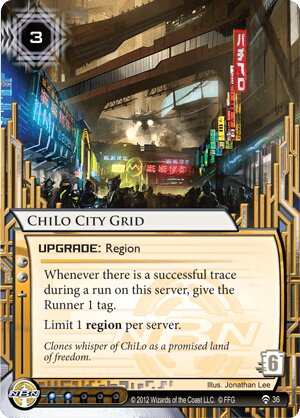 This is one of those cards that suffers from the problems of positional ice.

Here's the ideas you can test for yourself with it to see what I mean.

ChiLo-Muckraker: Three subroutines with traces. If any of the traces are successful, the runner gets a tag from Muckraker and one from ChiLo City Grid. If all 3 work, that's 6 tags. And even one tag lets Muckraker end the run. Sounds brilliant, right? Except for Mimic, a very common and often seen braker can ignore the whole mess for 3, or 2 and a bad pub provided by Muckraker. And Rez cost is 3+5+1bad pub means this is costly. So now we know that one issue can be that this does nothing if a sub can't fire, so we need traces where the cost to break is higher or even ones that can't be broken...

ChiLo-Overload: The trace on this card is not a sub, so they can't break it. Sounds good right? And the card needs tags to have subs, so that works too. If they fail the trace, you've tagged them not once, but twice! And STR 4 means that it's a little harder to break, I mean at least they need a Datasucker token or need to pay to pump a Switchblade or whatever. Solid, right? Trace 1 is a little rough on a corp. Think about how many good runners have 1 on the id. I mean, unless you have money to burn as a corp, this is not a trace that will expect to win often. Plus 3+6 to rez both... Corp is losing money and Runner just has to run smart. So perhaps what we need is something cheaper?

ChiLo-tenberg. Run R&D get two tags. 5 total to Rez, on R&D pretty rough to break. 2 tags every R&D run. Of course not a bit of it works until you have Gutenburg in place and it doesn't work so well off R&D, but Sync can make 2 tags very taxing and needs fewer cards to make a deck anyway. You now have a pretty solid tax on runners getting into R&D. You could also get a lesser version of this on Chi-Hunter or Chi-Virgo that works out of R&D and Making News can help you actually afford a trace or two at that cost of making the tags tax. Now the question... was Chi-Lo ever integral to this? No. If you really want to find these cards on time, you need at least 2 of each, but you might go for 3. And except for trashing resources you still don't have any tag PUNISHMENT in these cards and that will add cards you will need slots for. In other words, when you find yourself running out of card slots, the first thing you cut is the Grid.

And there's the issue.

Keep on reviewing early card with no review yet tonight. This last one and every card until Trace Amount are reviewed, and then I go to sleep.

Err, well... Never mind about this one so much, and never seen it played as far as I remember.

Maybe I've missed something about this card, but if someone has ever found, they didn't tell either.

(Data and Destiny era)
Lupus Yonderboi 230
The true power of this card is to make sure the runner get tag and "additional" tag. — Bainita0103 12 Nov 2015
I have tried to make this card work on a couple of occasions. It can absolutely swamp the runner with tags. It makes all traces nasty, and some of those traces come from very cheap yet high strength ICE, or even as on-encounter effects (Information Overload, Troll, and TMI). While entertaining, the decks I've tried have been pretty janky. The issue with this card is that it wants *a lot* of ICE in front of it, and you're playing NBN. — enk 12 Nov 2015
Now I think about it, Assassin could make this card shine. A kinda expansive combo, by the way. — Lupus Yonderboi 12 Nov 2015