Whenever you make a successful run on a central server, place 1 virus counter on Datasucker.

Hosted virus counter: Rezzed piece of ice currently being encountered has -1 strength until the end of the encounter. 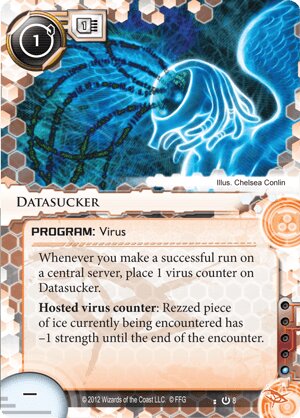 (All That Remains era)
EfficiencyCommittee 195
12

Datasucker is the reason that many quick, cheap to run builds worked in the early days. Consider the tokens on Datasucker to be free cash that can only be used during a run and only to modify the strength interaction of icebreakers. Also make note that a Parasite’d ICE that is affected by Datasucker counters will be trashed instantly.

This is one of the key components that allowed the fix strength breakers of the Anarchs to work. Without Datasucker, early Anarchs would have been hard pressed to break into many servers, even finding it impossible in some cases. It was also one of the ways that Andromeda: Dispossessed Ristie in the Genesis Cycle got off to a great start, even getting it’s own deck name ‘Andysucker’

This is also a card that lead to the formation of the strategy of ‘click compression.’ Running a central server with the likes of Desperado and other cards netted you multiple bonuses for the same single click. Even to this day, Datasucker remains a potent force even in the meta today, if not as common as before.

This card stinks. Most icebreakers (Corroder, Garrote, Gordian Blade) have the ability to get +1 strength for 1, which is functionally identical to lowering an ice's strength by 1. So on the click you ran to get that Datasucker token, you could have just clicked for 1 instead.

Except you had to pay to get past ice, you paid a click and a 1 to install the Datasucker in the first place, AND you still have a Datasucker taking up slots in your deck. Congratulations.

The only reason to include this card in your deck is cheap Noise mill.

There haven't been any reviews of this card in a while, so I figured I would break down the usefulness of Datasucker in the modern meta, particularly in light of the most-played Anarch breakers: the conspiracy suite.

Datasucker has been around since the original core set, and is often seen as the archetypal non-icebreaker virus. Historically, Datasucker has primarily been used to enable fixed-strength breakers. While those have fallen out of favor or rotated, Datasucker still sees some play alongside Aumakua, alongside which it doubles the value of certain runs. Other than allowing accesses via fixed-strength breakers, Datasucker counters can be used to save money, usually at an exchange rate of 1 counter = 1 for most icebreakers. However, this exchange rate is even better for the now ubiquitous conspiracy breakers.

While Paperclip, the favorite child, still yields the 1 counter = 1 exchange rate, Black Orchestra and MKUltra, infamous for their inefficiency, yield far better dividends when used in combination with Datasucker:

This card should be renamed "Funsucker". It rewards you and punish the corp for what you want to do anyway, and it does this all with a measly cost of 1, and 1 influence. This card, along with Mimic, Yog and Corroder should really have cost 1 extra influence each.