Whenever you encounter a barrier, you may install Paperclip from your heap (paying its install cost).

"It is not wise to call someone crazy until you fully understand what they're trying to say." -Omar Keung
Anarch • Adam S. Doyle • Blood Money 24
All sets:
Links: Decklists | ANCUR 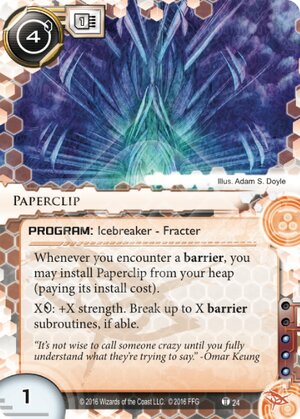 I think it's fair to say that Netrunner has grown and changed a lot since the core set days. As the card pool has expanded, new strategies have emerged, new synergies have shown up, and the sheer variety of the game has gotten bigger.

Except for Corroder. Corroder has been essentially the only fracter worth mentioning for the entire lifespan of the game. The only people who didn't use Corroder were runners that just could not spare the influence, and so they settled for less efficient options like GS Sherman M3 or Snowball, but it seemed as though nothing would ever truly be better than the core-set fracter.

Which is why I am pleased to announce a fracter which equals (and maybe even surpasses) Corroder. That card is Paperclip.

The first thing to note is that Paperclip never has a higher break cost than Corroder. I'll leave the derivation as an exercise for the reader, but suffice to say that Paperclip has the same cost as Corroder for any barrier of strength 2 or less, or for any barrier with only a single subroutine, and in any other case you are saving 1 or more credits by doubling up your strength. Eli 1.0, for example, will only cost Paperclip 3 credits compared to Corroder's 4.

I could just stop the review there, honestly. A discount on breaking Eli 1.0s, Hives, Heimdalls, and Curtain Walls is more than enough to justify the slightly higher install cost and influence cost of Paperclip for some decks.

Which is why the other defining feature of Paperclip is so brilliant. It brings itself back from the dead, at the very instant it is needed.

Let's start with the most basic advantage of this. Instead spending to spend a click to install it, you can simply overdraw and discard it, and it will wait patiently for you to need it. This saves you a click--and most runners value a click at about 2s, so you're already breaking even with Corroder.

But a card in hand is valuable for other reasons. Faust and Null use them as fuel, you can use it to soak up stray net damage, and although I don't think this is ideal Apex can play it facedown and burn it for later recurrence. You also don't have to worry about Injecting through it--in fact, getting paid to trash it is the best of both worlds.

It also means that, even if your deck has no other recurrence, you are effectively immune to being locked out through program trashing. Oh, you used Marcus Batty on a Grim to kill my Paperclip? Oh, now I can't get through your Vanilla...oh wait, yes I can. (ETR code gates are still an issue, but that's besides the point.)

If you're the last madman still playing Exile, this card is already filling your head with insane janky combos. Don't let me stop your insane ravings.

The last benefit is a bit more theoretical, so bear with me. In the early game, the runner doesn't want to install any breaker they don't strictly need, because this is time and money that could have been spent running. However, before the ice is rezzed, you don't know what you need. This is why Self-modifying Code is so useful, as it lets you find exactly what you need, exactly when you need it. Obviously, Paperclip lacks that versatility. But it does give you that timing benefit, of being able to hold off on that investment until the last possible moment. Imagine a game where the corp couldn't find a barrier and only installed only code gates and sentries--with Corroder, you might have to install the breaker regardless, just in case that unrezzed ice on the scoring remote is a Wraparound, or else risk a wasted run. With Paperclip, you don't pay for it until and unless you need it.

Corroder still has a place, I think. Two influence versus three is not a small consideration, particularly if you're running multiple copies out of faction, and that will turn some runners off Paperclip. Others, who rely on AI breakers, Quetzal's ability, or Always Be Running, might want to avoid fracters whenever possible, and use the cheaper breaker in the few times they need it. It's much the same logic of why someone would run ZU.13 Key Master over Gordian Blade in their decoder slot.

But expect to see Paperclip around. It's going to be a force to be reckoned with.

(Blood Money era)
tiedyedvortex 4610
I think it's worth mentionning the synergie with Maxx's ID ability. Between Paperclip, Black Orchestra (if it's not too clunky) and hopefully a Killer with the same "Install from heap" ability (failing that, Femme Fatale+Retrieval Run), we might see a fun new archetype emerge. — Akanthinos 17 Aug 2016
As a passionate Quetzal-player people tied to convince me to put a corroder in my deck, for when the corp stacks barrier. Despite the fact that with Faust, David and knifed, that hasn't really been a problem, if i ever was to put a fracter in my deck i would choose Paperclip over Corroder. It would be the first card to throw away because i will most likely not need it anyways, and a Corroder would just be wasting space in my hand waiting for a moment that might never come. — Infectiou 19 Aug 2016
I would stress out the point "It brings itself back from the dead" -> Paperclip is also trash-resistant, even during a single run, trashing Paperclip will only incur additional tax, but not stop the runner. Unless there's Blacklist behind a barrier, Chronos Prototype scored or something, it won't happen that the runner will be locked out. — NoxArt 20 Aug 2016
Why have 2 anarch fracters in the same pack? This breaker also seems much stronger than all the previous fracters and I hope FFG aren't introducing power creep. Also, anarchs have loads of fracters but few decoders and killers - is there any chance of new orange decoder/killers being released in this set? — DGB123 24 Sep 2016
Additionally, I think paperclip will be popular among criminal players as it is both an effective fracter and it's built in recursion means that you only need one in the deck - no need for a 2nd copy or recursion to cover against programme trashing. — DGB123 24 Sep 2016
"ETR Code Gates are still a problem" --- Hi Black Orchestra! — LordRandomness 9 Nov 2016
I know it's been months since this card came out but I noticed something in this review about Paperclip breaking Eli 1 for 3 creds; this is wrong as the breaker needs to get up to barrier strength before it can start breaking subroutines, which means paperclip needs 4 creds (same as corroder). — DGB123 6 May 2017
How do you figure? With X at 3, Paperclip is Str4 and breaks 3 subs. That gets through Eli 1.0 unless I'm missing something. — cynchwyrm 14 Sep 2017
Yeah, I misread the card - the review is correct and I was wrong. — DGB123 7 Oct 2017
19

Another flavor/educational review, continuing from the previous MKUltra review.

This card, in tandem with its two partners, is one of three conspiracy theories of history that appear in Netrunner as Omar's rig. Operation Paperclip was a United States OSS program, where over 1,500 German scientists, engineers, and other technical specialists were brought over from previously Nazi Germany, to be recruited into government positions. Many of these individuals were former leaders or prominent figures in the Nazi regime. The purpose for this project was for the U.S. to garner intelligence that would give them an edge in the developing Cold War and Space Race with the Soviet Union. This initiative was also carried out by the Soviet Union, though their methods were considerably more forceful (i.e. Forcing over 2,000 Germans, at gunpoint, to join them).

The Germans to be recruited were based on a list of those with technical prowess (called the Osenberg List), compiled by the Germans while attempting to bolster their own technology to defend against the USSR, who had been thoroughly defeating them thus far. Eventually, pieces of this list were discovered by a Polish technician, and it eventually found its way to U.S. sources. The list was used to recruit and interrogate German technicians, scientists, and engineers. Those with worthwhile skills or knowledge were sent to detention and interrogation centers, sometimes for months. Much of those who eventually joined the U.S. and worked in vital technological positions were seen as "intellectual reparations" owed to the U.S. and U.K. It's believed that robbing Germany of some of its greatest minds severely hindered their technological recovery.

(Quorum era)
slobad31 545
so I can't intall Paperclip when encounter a Loki which gains barrier type ? — rieka 27 Dec 2017
@rieka Yes, you can as Loki will gain the barrier type off another barrier at Step 3 in a Run while you can use the paid ability window at Step 3.1 to install Paperclip. — BlackCherries 25 Feb 2018
@BlackCherries This is incorrect though. Paperclip is also a When Encountered, not a general paid ability, therefore it only gets to fire in step 3.0, and runner step 3.0 fires before corp 3.0. — profDEADPOOL 27 Jun 2018
It would need to be wording as "when encountering", not whenever you encounter, for it to be usable in step 3.1 — profDEADPOOL 27 Jun 2018
2

This card was a huge design mistake. It has warped the meta so hard that barriers are all but non-existent. Why put a barrier in your deck when you can just play another etr code gate that is more taxing and probably has a facecheck punishment to boot?

The fact that this card was still allowed to exist after MWL 2.1 shows that Boggs actually doesn’t know what he’s doing, and it scares me.

(Down the White Nile era)
TKO 4
One of the chief issue's I've seen be raised is that Paperclip's replacements in Anarch don't really compare too well. BlacKat can be very efficient (with stealth support), and Morning Star is awesome when (if) you get it to work. Yusuf needs even more support and is vulnerable to purges, and then there's what? Berserker? Nfr? — OneQuarterPower 25 Feb 2018
Barriers and their counterpart Fracters are in a weird design space right now. Barriers have historically always been the cheapest-to-rez with a solid ETR at the downside of being easy-to-break (see Corroder in Core 1.0). As Corroder's popularity skyrocketed due to its flexible nature and great numbers, many played it. This obviously led to corps deciding whether to include barriers solely on how they fared vs. Corroder (see Eli 1.0). Eventually, we got to a point where unless you were Blue Sun, there was no point in playing mid-to-high rez costs for high-strength barriers as gearcheck barriers became the norm. In response, we started seeing nastier barriers being released that actually had facecheck penalties which went against the historical norm for the subtype (see Bulwark, Tithonium, Chiyashi). Those expensive barriers still see tons of play today but imagine how runners would get past them without Paperclip now that Corroder is gone. Practically all of Anarch’s remaining fracters are quasi-fixed-strength except for BlacKat (and Yusuf?), which would still struggle against the expensive barriers without a proper stealth setup. I can’t defend Paperclip, you’re honestly right that it should never have been designed (the install-from-heap is overkill) but barriers/fracters may be stuck this way. — BlackCherries 25 Feb 2018
I see my opponent toss all his Paperclips in the bin. I then rez a Black List behind an Paper Wall. This has stopped many in my local meta. Paperclip is not all powerful. — lunchmoney 28 Feb 2018
That situation is very rare. — Apex Predator 4 Jul 2018