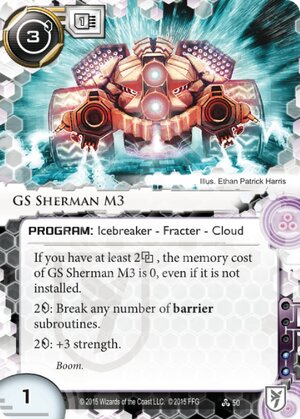 If you have at least 2link, the memory cost of GS Sherman M3 is 0, even if it is not installed.

While @LeaPlath's analysis is technically correct (the best kind of correct), I think it is a little narrow, because it doesn't take into effect the fundamental purpose of barrier ICE.

All Barrier ice ends the run, and for the vast majority that is all they do. Sometimes the ETR is conditional on a trace or psi game, or can be clicked through, or requires that the runner is tagged, but ultimately the sole purpose of a barrier is to keep the runner out.

Once a fracter hits the table, the question is different. Now, a barrier will only keep the runner out if they cannot afford to break it. At this point, your "gearcheck" ice is not going to do much, since it will typically cost only 1 or 2 credits to get through. You will want to be using the big ice. Heimdalls, Curtain Walls or Hadrian's Walls, Ashigaru or Wall of Thorns: these open windows when the runner is too broke to both match their high strength and break their multiple subroutines.

Sherman and Corroder each specialize in one of these areas, at the cost of the other. Corroder mows through most gearcheck ice at 1 each: but taking down an outside Curtain Wall will cost a whopping 11. In contrast, Sherman eats a Curtain Wall for only 8...but the minimum cost to break any ICE is 2, or 4 if it's strength 2 or higher.

But that's a poor trade to make, generally. Because gearcheck ICE typically gets rezzed early, frequently over central servers, you can expect to break a cheap barrier 3 or more times over the course of the game as you put pressure on HQ and R&D. On the other hand, big screw-you barriers will typically be played over the scoring remote, and you're only likely to actually pay through them once or twice. This means that, in the long run, you are typically coming out way behind using Sherman instead of Corroder.

On top of that, while almost every corp runs gearcheck ice to protect their centrals, many corp archetypes don't bother with the expensive ice. HB or NBN fast advance, Jinteki shell game, Weyland murder, and many others spend their efforts on other tactics besides "build a big scoring remote and win".

But that doesn't mean there aren't good reasons to run Sherman.

Basically you need to ask yourself: "Am I willing to pay 4 to break a Himitsu-Bako?" and if you're willing to accept that possibility in exchange for some MU and link shenanigans, then maybe Sherman is justified. Maybe.

(Data and Destiny era)
tiedyedvortex 4617
*shakes fist* Curse you, out logicing my logic with superior logic! — LeaPlath 9 Nov 2015
I feel like Ice Carver is a must for Sunny decks, considering they start with 1 less strength than many pumpable breakers, and many pieces of ice have 2 strength. — yang573 10 Nov 2015
What about Datasucker, @yang573? It has 1/3 the influence and synergies with Jak Sinclair for free archive runs — LeaPlath 10 Nov 2015
Although the logic's logic is logical, meta-calls will always make Sherman relevant (or not). — M1ke 10 Nov 2015
(And Shift-Enter doesn't work in comments) Multi-sub ICE will always be the bane of efficient programs, like Lady, D4v1d, or the latest beloved Faust. — M1ke 10 Nov 2015
The other main point is that since it costs 0 memory with 2 link you can potentially install it alongside another Fracter as a secondary if you just need the ability to crack those late game Barriers. — LordRandomness 31 Mar 2016
Sherman pairs really nicely with Inti. If you can afford the slot, I'd consider 1x Sherman + 1x Inti in Nexus or Congress Kate. You could also use Sherman alongside Wyldcakes Faust for Spiderweb, Hive, and Wraparound. — PureFlight 17 Aug 2016
7

I've been looking at this card and thinking, is it better than the multi-deck staple barrier breaker, Corroder. So I ran some maths, I took each barrier breaker in the game, assumed 3 for all the barriers which grow stronger, such as Next Silver and the results are interesting.

On average, to break every piece of Ice in the game, Corroder will cost 4.225. In total (not including barriers that change types to become barriers), it costs 131 Credits.

In comparison, Sherman will cost 4.45 on average. It can break every piece of ICE in the game for 138.

On top of this, Sherman costs 3 to install and is out of faction for everyone, which means stretching influence even further in a deck like Anarch. So Sherman is just strictly worse, right?

I don't think so. In non-Anarch decks which want high link or can get high link such as a bigger rig Geist deck, I think this might work. It provides a powerful breaker, which costs no memory, which might allow you to install and run high memory cost cards, such as Sneakdoor

Also, with a Datasucker, you can make Sherman much much easier. Reducing strength by 1 to get a barrier into the 1-4-7 range saves you a whole 2 credits, which helps negate one of Sherman's issues.

So if you haven't tried Sherman yet and you are running Corroder and Datasucker, while being out of Anarch faction, give Sherman a try.