"The Grim of legend was one of many so-called 'black dog' myths common to Gaelic and English-speaking communities. What's fascinating is that it has propagated to the network, where it lives on as a program that, or so the story goes, hunts for the unwary." -The Professor
Neutral • Liiga Smilshkalne • Opening Moves 20
All sets:
Links: Decklists | ANCUR 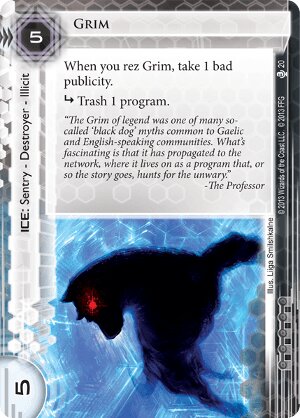 Grim the evil nocturnal apparition that haunted the British Isles is no puppy, it can take quite a bite out of the runner but any corp admin should take care lest it turn on the owner in the form of bad publicity

Remove/avoid Bad publicity: Elizabeth Mills (perhaps along with Blue Sun: Powering the Future to recycle E.M as many times as needed), Exposé, Rex Campaign, Clone Retirement, Restoring Face, Broadcast Square, The All-Seeing I & Veterans Program all make it possible for the corp to avoid or remove bad publicity which may some of the bite out of rezzing Grim. NOTE: Ireress in most cases basically negates bad publicity on a server IF it isn't broken.

Go ahead and bite me!: What good is bad publicity to a runner if there are no ice-breakers in the rig? GRNDL: Power Unleashed along with ice like Grim and an operation like Power Shutdown is one example of such a strategy

Buff strength: Combined with strength buffing options such as Chum, Corporate Troubleshooter Experiential Data, IT Department, Lag Time, Patch etc all can improve Grim making it more taxing especially for ice like Ninja who's 3: +5 strength range forces the runner to spend yet another 3

Recycle: In certain circumstances the corp may want to actually trash Grim (get rid of Knight or a Femme Fatale token for example), if so having Blue Sun: Powering the Future could help recover some sunk costs. Corp will still have to deal with bad publicity when re-rezing Grim.

Even though Grim has no End the run , surprising the runner and trashing judiciously may effectively end the run anyway and perhaps many future runs while the runner scrambles to repair a gaping hole in the rig.

As a 5 strength Sentry it has some sticking power

The threat of messing with the runner rig or causing a meaningful tax, on the runner to break Grim may pressure the runner to make less than optimal decisions (considering how killers tend to be the least efficient ice breakers).

Without an End the run the corp may still need to rely on other ice to keep the runner out.

sometimes not very taxing: As a Sentry Switchblade or Dagger gut Grim for only 2 stealth-based s. Likewise at strength of 5 Grim is easy target for Ninja for only 4 non-stealth

Forked and (with a few more variables) Forged Activation Orders Parasite etc can trash Grim taking the 5 rez cost with it while possibly keeping the bad publicity to add further insult.

At 0 influence cost it makes sense that Grim has been featured on a variety of very successful decks. Usually this includes some combo of bad publicity mitigation. Rig trashing decks can be fun to pilot, however given Grim's owner biting potential, unless your deck is built to withstand some bad publicity, I recommend you invest in a a good muzzle, otherwise you'd be safer considering a pit-bull!

(Data and Destiny era)
chris_walker 621
since it's a one-sub ICE, Dagger is also pretty good at breaking it. Ninja is also reasonably efficient. Grim is pretty good in GRNDL, which usually ignores bad pub and just rushes on. Being able to trash runner's important breaker early on might be a big tempo hit. — Shieldwall 4 Dec 2015
Your comment about Ireress isn't quite correct. Breaking Ireress is in almost all cases as efficient or less efficient than letting it strip away the credits earned from bad pub. The obvious exception to this is Yog.0, but there are a few others. — FarCryFromHuman 4 Dec 2015
Thanks Shieldwall, review has been improved with your tweaks. Also added Elizabeth Mills/Blue Sun combo that I found on Elizabeth Mills review. Thanks FarCryFromHuman, see your point, I have massaged the wording to take your point into account. — chris_walker 4 Dec 2015