Whenever you are about to take at least 1 bad publicity, trace [3]– if successful, avoid taking the bad publicity.

Tourists have flocked to Broadcast Square in even greater numbers ever since the notorious Ho-meh's crime spree ended there in a hail of flechettes. Well, that's how it happened in the sensie.
NBN • Henning Ludvigsen• Double Time 112
All sets:
Links: Decklists | ANCUR 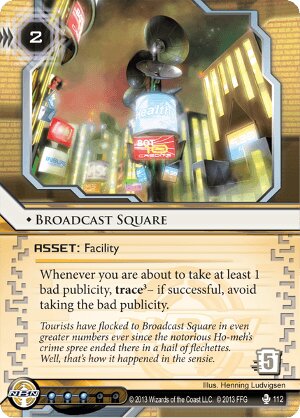 Been a misbehaving corporation? It's a lot easier to redirect the public eye when your company is responsible for broadcasting the news! What's better than getting rid of bad publicity? Avoiding it in the first place perhaps? Broadcast Square is an asset that allows the corp to possibly avoid bad publicity, which in turn may allow the corp to misbehave even more!

Nasty Ice: Checkpoint, Muckraker, Grim, Fenris, Shinobi & Swarm are all examples of ice that add bad publicity as part of their cost, having Broadcast Square installed could take the sting out of rezzing these cards.

Evil Agendas: Some agendas such as Hostile Takeover, Geothermal Fracking, Posted Bounty, Project Ares, potentially cause bad publicity to hit when scored, similarly other agendas like Clone Retirement or Vulcan Coverup put bad publicity on the corp if the runner steals it before scoring. Finally NAPD Contract is harder to score with every instance of bad publicity, in each case an installed & rezzed instance of Broadcast Square could help here by potentially avoiding adding any new bad publicity.

Other Illicit Stuff: Additionally Broadcast Square can make it easier to make use of assets usch as Reality Threedee by possibly allowing the corp to avoid taking on bad publicity. Failing a trace with Hellion Alpha Test, or the fun little operation: Invasion of Privacy

Bad Penny: With perhaps 3 copies of Broadcast Square at 5 cost to trash, having some recuring options like Jackson Howard, Interns, Archived Memories etc could make it very taxing for the runner to keep taking it down. (say 15 + 5 additional for however many times it is recurred)

Trace Boosters: Because of Broadcast Square's reliance on traces, any card that boosts the corps base trace amount has some synergy. Rutherford Grid, Net Police, Primary Transmission Dish, the Identity NBN: Making News fits here and even ChiLo City Grid & Surveillance Sweep for example put their own spin on helping with traces.

Trash-resistant: At 5, Broadcast Square should give most runners pause before trashing.

Reputation: Broadcast Square is very useful in it's ability to potentially keep many instances of bad publicity hitting the corp, opening up many other potential side benefits for the corporation while denying mitigating benefits to the runner.

Cheap Avoiding even 1 bad publicity could likely deny the runner a significant econ boost for the duration of the game certainly justifying it's small 2 cost.

Surprise: As an asset, Broadcast Square can be kept unrezzed and in many circumstances rezzed during the paid ability stage, say during a run to be able to confer it's benefits before rezing ice or other actions.

Risk Unlike some bad publicity removal methods available to the corp, Broadcast Square relies on being installed, rezzed and finally a trace-3 that gives the runner some ability to control the situation and perhaps deny the corp the ability to utilize it.

Tight Econ: If money is tight for the corp even rezing Broadcast Square for 2 may be too costly and come at the expense of actually getting to use it's ability or rez ice etc.

In the Crosshairs: Runners may decide to target Broadcast Square forcing the corp to invest ice at s and perhaps even into protecting it possibly to the detriment of other priorities.

I like Broadcast Square, it's influence of 3 makes it much less popular for other decks, perhaps 2 influence would have made trade-off decisions to weigh more in it's favor. Still for decks that seem to push the limits with bad publicity Broadcast Square is one of several decent options worth considering.

(Data and Destiny era)
chris_walker 643
Would like to point out the combo with Rutherford Grid (a lot of illicit ice are tracers) which boosts the trace if it's during a run, allowing you to also gain the bonus on rez assets like Reality Three-dee. If you really wanna go nuts, combine with Chilo! — whirrun 11 Jan 2016
Thanks whirrun! Yeah that's a whole category of combos that needed to be added to this review. Trace Boosters has been added accordingly — chris_walker 11 Jan 2016