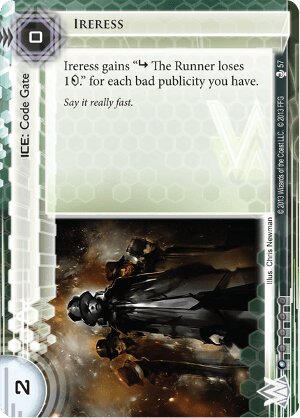 Ireress gains "subroutine The Runner loses 1credit" for each bad publicity you have.

Say it really fast.
Illustrated by Chris Newman
Decklists with this card

Ireress is typically a pretty bad card. But I think it's slightly underestimated.

In effect, Ireress makes it so that bad publicity doesn't count for runs on the server it protects. If they're breaking code gates with any /sub decoder (Study Guide, ZU.13 Key Master, Gordian Blade, Passport) then it will cost them as more or more to break Ireress as it would to just take the credit loss.

But there's another big problem, and it's name is Yog.0. The anarch decoder completely ignores the effect of Ireress. If Yog.0 is popular in your meta, Ireress isn't worth the install cost. You could always Patch Ireress, but that's probably more effort than is justified.

But I think there are some saving graces that make Ireress slightly more than just binder fodder.

First, you can put more than one on the same server. Now you aren't just undoing the effect of bad publicity: you're actually using it to your advantage. If you have 5 bad publicity and two Ireress on R&D, then it's going to cost the runner 5 credits every time they want to get in. They don't need an icebreaker to do so, unfortunately, but compared to another 0-rez code gate, Pop-up Window, it's pretty respectable.

Similarly, it's multiple subroutines combo quite well with TL;DR. In this case, they can still break the TL;DR, which puts an upper limit on the tax potential of the server, but for a combined rez and install cost of 2 that's pretty okay.

Likewise, putting a Chum in front of Ireress is pretty funny. Now, they either have to break the Chum, or they have to deal with Ireress as a 4-strength, multiple-sub code gate that does 3 net damage if they can't break it.

Is that enough to save this card? No. Probably not. But if you're already building a bad-pub heavy deck with Hostile Takeovers and Geothermal Frackings, it's worth considering if Ireress fits in with your strategy.