You start the game with 10credit and 1 bad publicity. 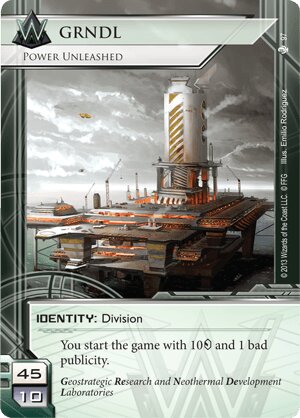 It's probably my favorite Weyland identity thematically (destroy the Earth for cash!) but the 10 influence limit really puts a damper on it. Still, ten credits out of the gate is a better ability than it sounds like.

(The Underway era)
lobotomy42 49
I agree that thematically it is a great ID, but giving the runner up to 4 credits per turn from turn 1 puts a lot of strain on +5 credits. The creds only truly help net early Restructures, but that is just 1 extra credit that Weyland in general doesn't have a hard time obtaining. Then factor in 10 influence, which limits Grndl's options. Maybe at 12 influence, which seems to be a common 'low influence' amount for Corp. The easiest BP removal is Elizabeth Mills, but you'd want her early enough to limit the Runner's income, and she still costs 1 click + 2 credits, meaning your initial boost is 1-2 net credits depending on the value you give clicks. — LynxMegaCorp 22 Jul 2015
Didn't get to finish my comment, but I think maybe 40 deck size + 12 influence could put this ID in a better position. — LynxMegaCorp 22 Jul 2015
This feels like a card that's just waiting for more positive ways for a corp to take advantage of bad publicity, along the lines of Ireress. — Thaddux 22 Jul 2015
I'm with Lynx: the 10 influence is painfully low. Bad Pub is pretty bad, and with all the Valencia about, GRNDL is probably one of the weakest IDs in the meta at the moment. Still, being able to score an agenda turn two and still have enough credits to play Hedge Funds is kinda nice. — PureFlight 31 Jan 2016
GRNDL is better suited to dealing with Valencia then any other ID - in fact GRNDL literally cancels out Valencia's ability (you start the game with 1 bad pub, rather than 2). Also, as GRNDL, you know that you're starting the game with 1 bad pub, so you know you need to tech against blackmail. As a GRNDL employee - Elizabeth Mills, Oversight AI and Priority Requisition are your friends :-) — Kikai 5 Mar 2016