This operation is not trashed until another current is played or an agenda is stolen.

All ice have +1 strength.

"I don't care how good your console is, or how tricked out your rig is. The lag time on a run on the moon from earthside can be a killer." -Leela Patel
Neutral • Ed Mattinian • The Spaces Between 31
All sets:
Links: Decklists | ANCUR 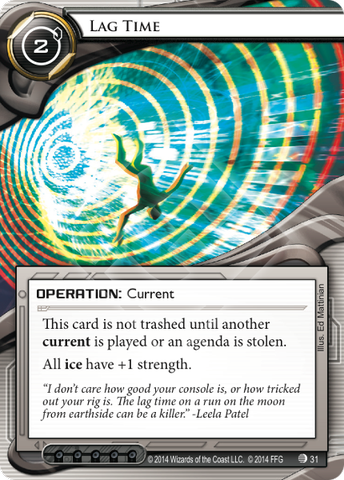 Lag Time is not the equal of the strongest Corp currents in the game, namely Enhanced Login Protocol and Cerebral Static; it's a neutral card with no influence cost after all. However, other currents are niche effects that are quite powerful when placed in the right build. Even though Lag Time has a very plain effect with no obvious special niche in comparison to say Manhunt or Defective Brainchips, it should be viewed through the same lense.

Viewed at a most simplistic level, it imposes a 1 tax per ice the runner encounters, and also kills any currents the runner has in play. In reality the effect is a bit more nuanced than that. Because the base strength of many icebreakers is more than 0, this tax will only occur so long as the ICE exceeds that strength ie. under Lag Time, a Corroder won't be slowed more by an Ice Wall, but it will notice the extra strength on a Wall of Static; likewise a Komainu will still be too weak to bother Mimic, but Architect just pulled it's underwear over its head. The extra strength will also not help if the runner doesn't actually need to use an icebreaker to break subroutines on the ICE ie. Negotiator, Eli 1.0, Caduceus or Pop-up Window.

All this makes selecting the right deck and ICE for Lag Time to support important, otherwise you will be underwhelmed. Where Lag Time does best is in a deck that is built around taxing the runner, specifically via accesses using lots of medium-strength ICE that the runner has to break to safely proceed. This may seem obvious but it's an important point to make, as there are plenty of Corp decks that tax runners in other ways or use other forms of disruption than taxation, if they even care about what the runner is doing!

In the right sort of taxing deck however, Lag Time will cause the runner trouble that you can exploit to buy time to enact your plan or create scoring windows. If they have to pass 3 pieces of ICE in a turn, say, suddenly you've neutralised their Security Testing + Desperado economy engine. That cute little Symmetrical Visage just turned back into a regular action drawing 1 card that they paid 2 and a to install if they break an average of just 1 ICE a turn. And if they're in the economic position of having to click a lot for credits, you've now made them a full slower for every ICE they have to fight through. Also very important to remember is that fixed-strength breakers (primarily Mimic, Atman and Yog.0) can be completely shut down if care is taken to select the right ICE, or at least at minimum your opponent will be taxed Datasucker tokens at a much higher rate than they can replenish (and remember Net-Ready Eyes can only affect 1 breaker per run).

Whether this type of deck is tournament-competitive is of course meta-dependent, which is a part of the reason it's never caught on as of time of writing, but don't mistake that for Lag Time not having a place in people's decks.