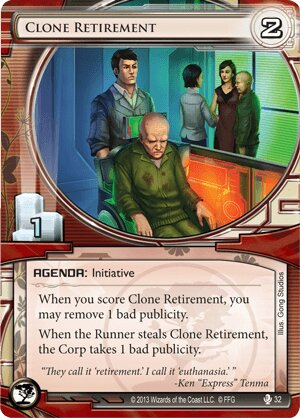 When you score Clone Retirement, you may remove 1 bad publicity.

So the first thing I see when I look at this card is not the 2 advancement. It's not the 1 point. It's not even the text. It's that dirty, dirty cardigan. You dirty old clone. "... peeps need to respect themselves when they leave the house. Even if it's just for ice cream, or TP, or whatevs." -Jake the Dog

Clone Retirement's in an odd spot. It's one of the long term mini-cycle of 2-advancement agendas (with Hostile Takeover, Breaking News and Domestic Sleepers -- yes, that last one's a bit of stretch). And, I must say, writing circa Order and Chaos, I have to wonder just how much Clot is going to hurt Hostile Takeover. Because the best thing about these agendas is they're inherently score-from-hand-able (barring The Source or Chakana trickery. There's no way the Corp loses clicks, right?).

On one hand, the Jinteki decks that most want to score small agendas quickly (Black Tree "Death by a thousand cuts) really don't care about Bad Publicity, (or indeed, the runner's econ in general) which negates the downside: but these decks tend to want to play out a lot of agendas, which makes the 2-cost thing a bit less useful. Sure, there's scenarios where such a deck could be too scared to play anything face-down, but want to fast advance the last few cards ... but it's hard to imagine that in such a situation they'd have strongly enough defended centrals to survive, and even they did, it's such a small corner case as to make it not worthwhile.

But the major Jinteki decks which do care about Bad Pub (mostly taxing White Tree builds) tend to be defended enough to not want or need to score from hand -- which makes the downside of losing this from centrals (and if this is getting stolen anywhere apart from centrals, you're doing it very wrong) even worse.

The one deck where this does get played at the moment is Tennin-Trick of Light Fast Advance decks ... where again, bad pub is a bad thing, and the tension of this design shines through. It really is a nice design in a cool spot.

What is interesting will be to see just how good Valencia becomes, and how much she makes Bad Publicity a thing to worry about. I can't imagine Blackmail recursion posing a serious threat to RP decks, let alone PE, but if pesky hacks start scything their way through their glaciers, they'll take notice. But if Itinerant Protesters becomes a thing, every single Jinteki player is going to have to really seriously consider packing a couple of these. Which can help, or it can make it worse...

I honestly think this card is a 2 of in builds where players have 7x 3 pointers (or 6x 3 pointers and a 2 pointer). But I don't for the life of me understand why they don't include them. I think my logic is fit. If the Retirement was a 2 pointer or another 3 pointer and they topped it off of R&D you still would lose if they had 6 points or 5, they'd have 9 or 8 for the win. Lowering your agenda count by 1 agenda but taking away your ability to turn 2 score your "Easy 3 pointer" is not worth the %s. I think scoring 3 of - 2/4s, 2/5s, or 3/5s is insanely tough, 2 turns too tough. I think giving you a Valencia Estevez: The Angel of Cayambe clearance for a little while and giving you your win quicker is way worth the 1 extra agenda card slot, not to mention if you draw a 2nd just score it, and work on your agenda spread. My 2¢...

(Order and Chaos era)
rezwits 56
This deck has a couple of applications in a Black Tree deck. Obviously, you can score it out of hand on the rare occasion you find yourself on 6 points, or put yourself up to four five to force the runner to check things more freely. — DavyRam 16 Feb 2015