When you install Femme Fatale, choose an installed piece of ice. When you encounter that ice, you may pay 1credit per subroutine on that ice to bypass it. 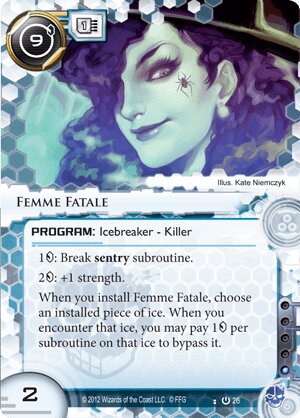 (Up and Over era)
EfficiencyCommittee 196
You can scavenge a femme to choose a new piece of ice with er ability, not a good enough combo to specifically include one in a deck with the other, but if you happen to have both its useful when you really need to change your target server. — tsuruki23 12 May 2015
"Be aware that the corp can "revive" a femmed piece of Ice with Chum" — IronTiger 14 Jan 2016
Is komainu a good target for femme? Its only subs are from its when encountered. As I understand it from the FAQ and other discussions, the 'when encountered' ability triggers but is not resolved because the runner bypasses. So would you not still have to pay for each sub? Or am I missing something and it has no subs so you dont need to pay anything? — Pilltechre 29 Jan 2016
Sorry, found it now. It costs nothing. Its in the FAQ where it answers what happens when chum is unbroken infront of komainu. It doesnt really say why you dont need to pay for each sub, only that it costs 0. — Pilltechre 29 Jan 2016
This is because, like Troll, Komainu has no subs until encountered. Chum doesn't work with ICE without subs aside from adding strength. — Zanc 10 Apr 2016