I didn't say your hopper should be hauling garbage. I said it should be hauled away as garbage.
Neutral • Krembler • Downfall 29
All sets:
Links: Decklists | ANCUR 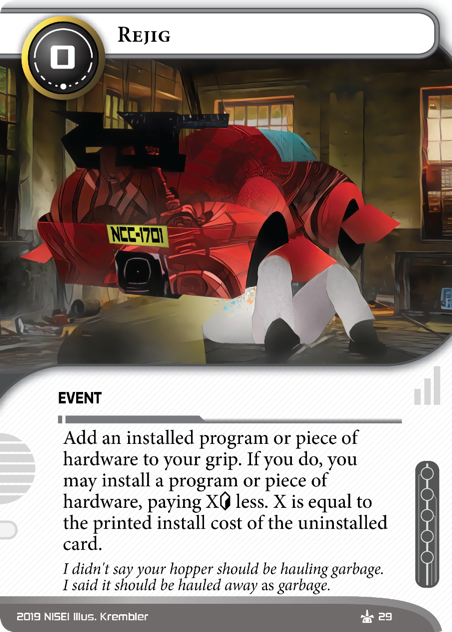 So...this is the great problem you get when you have a game that alludes to so many fandoms at once: you never know when the things you pick up on are things only you see, or things most people see. Anyway, here goes.

The NCC-1701 on the hopper's license plate is the ship's number of Star Trek's Starship Enterprise. The hopper looks nothing like the starship...it's the wrong color, wrong shape, wrong size, you get the picture.

The quote at the bottom is from two different Star Trek episodes: the Original Series' "The Trouble with Tribbles," and Deep Space Nine's "Trials and Tribble-ations." In the former, the crew of the Enterprise finds itself at a starbase which serves as a sort of safe haven to both members of the Federation (AKA "The Good Guys") and the Klingons (AKA "The Bad Guys"). One of the Klingons, seeking to make trouble, makes the mistake of describing the Enterprise using the above quote, which prompts chief engineer Montgomery Scott to defend the honor of his vessel by starting a bar-fight.

In "Trials and Tribble-ations" the Federation and the Klingons have made peace, but somebody goes rogue, and goes back in time to install an explosive device in one of the "tribbles" (harmless self-fertilizing fuzzballs that breed like crazy) in order to kill Captain Kirk. The Deep Space Nine crew goes back in time to try to stop the killing, and encounters a lot of the same scenes that appeared in the original.

I'm not a Star Trek expert, so some of you out there can probably catch all kinds of little mistakes in there. I just remember watching "The Trouble with Tribbles" over, and over, and over again with my dad. He's a purist and he'd "kill" me if he knew I was even talking about anything other than the original series with y'all. Thanks for the nostalgia, Nisei!

This is the new Scavenge. Different but simillar.

Posible uses I can think of

-Revamp a program that it's key when it's installed (such as Femme Fatale or Gauss).

-Avoid destroying a program when you're tight on memory (for example, take back a Rezeki when you need the icebreaker)

-Take the discound of a less useful hardware or a used program (Such as Pelangi or Imp) to install the next piece of the suite.

The main difference is that this card goes to your hand so it counts at least to cardboard to take damage or being installed later, but the card can't be used to revamp a used Chisel.

As mentioned in valerian32's review, this card is likely to replace Scavenge if that card rotates along with Creation & Control (as is allegedly going to happen at the end of 2019).

Rejig is interesting because it allows you to achieve a couple of niche effects. Two that seem most useful are re-installing programs that come into play with counters (Pelangi, Imp, Cerberus "Lady" H1, D4v1d) as well as allowing Kabonesa Wu: Netspace Thrillseeker to keep cards she tutors in play. Unfortunately, Rejig has yet to see much use in serious decks. The modern praxis is that it is typically easier to sacrifice spent cards to Aesop's Pawnshop or even Spec Work, and then recur them as necessary with Clone Chip (or simply install a new copy). Wu typically uses Self-modifying Code or Scavenge to get around the downside of her identity ability. Clone Chip and Scavenge simply have greater versatility compared to Rejig, and as such see much more play, even in Anarch (and sometimes Criminal).

While Rejig hasn't been seen in top-tier play, beneath the surface, in the seedy Netrunner underbelly of the jank-pits, Rejig does enable one trick: re-hosting icebreakers.

In decks that attempt to build a mega-breaker with Dinosaurus or Baba Yaga, drawing your icebreakers before the cards they should be hosted on is not ideal. However, Rejig essentially functions as copies 4, 5, and 6 of Scavenge, and allows you to easily uninstall your breaker, then place it on your newly installed dinosaur friend or spooky AI. This allows these decks to be on track to steal their first agenda by turn 14.

In casual play, it allows you to move Savant from Dhegdheer to Dinosaurus, a move that instills fear in the heart of any Corp, granted they have not already scored 5 points by now.

TL;DR This card is worse than Scavenge, but is neutral, so there you go.