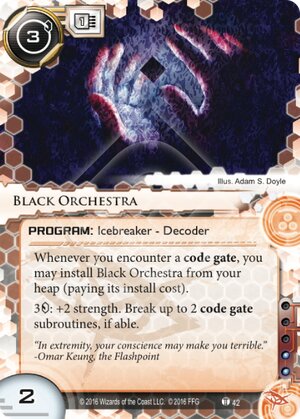 Whenever you encounter a code gate, you may install this program from your heap.

3credit: +2 strength. Then, if this program can interface with the code gate you are encountering, break up to 2 subroutines.

"In extremity, your conscience may make you terrible." -Omar Keung, the Flashpoint
Illustrated by Adam S. Doyle
Decklists with this card

This is part 3 of a flavor/educational review. There's only one more I plan after this, so I hope this isn't detracting from gameplay reviews.

The name of this card is derived from Schwarze Kapelle (German, which translates to the same). It was a term used by the Gestapo to refer to conspirators within the German military who plotted to overthrow Adolf Hitler. These were highly patriotic Germans, who feared Hitler's reign would ruin Germany. They intended to overthrow the Nazi party to preserve German sovereignty. They hoped to preserve the gains already made by Hitler, not rejoining a democratic order of nations. They believed that Germany had gained significant power, and they sought to preserve it, believing Hitler's pride would eventually cause the country's downfall.

Meanwhile, the Allies refused to accept the credibility of the Black Orchestra, believing them to be a front for the Gestapo. Unable to reconcile differences, the Black Orchestra drafted the blueprints for a system of government, based on the British Constitutional Monarchy. They also readied a coup, as a means of preventing an invasion of the Sudetenland. If Hitler gave the invasion order, the coup would begin, in order to stop him. However, as this order never came, the coup was aborted.

With the Munich Agreement, Hitler garnered enough power that a successful coup would have been impossible. When Hitler later planned a controversial invasion of neutral lower countries into France, tensions within Germany grew again to the point the Black Orchestra planned yet another coup. However, faulty intelligence led the Black Orchestra to believe Hitler had found them out, resulting in aborting the plan and burning all related documents.

It was some time until Hitler's popularity again fell, this time due to the failed Operation Barbarossa. However, the declaration by the Allies that they would accept nothing less than unconditional surrender pushed the German military into a corner, resulting in harsher tactics. The Black Orchestra's numbers had dwindled significantly, and one of their final attempts (in 1943) was to place a bomb on Hitler's plane, which failed to detonate..

On July 20, 1944, the Black Orchestra had its last crescendo (pun intended), as they attempted a direct assassination on Hitler in his "Wolf's Lair" field headquarters near East Prussia. The failure of this attempt led to the arrest of over 7,000 people by the Gestapo, of which over 4,900 were put to death.

The flavor text of this card actually seems to coincide with the real-life events. Forced to extremes, the Black Orchestra members escalated their plans, from a bomb to a direct assassination. These acts, guided by their conscience to defend the honor and reputation of their country, led to their deaths.

The code-cracking little brother of the new wall fracking star. I won't get long on the obvious : credit for credit, it's far to be as good. I won't consider the "install from heap" ability either. We know the corp counter comes along and that very good option is more risky from now. Let's see what it's worth as a new Anarch decoder.

Anarchs used to deal with code gate with Yog.0 and Datasucker, then came some answers (Lotus Field first, but also Little Engine, Archangel, Wormhole and Cyberdex Virus Suite) and Anarchs were not really keen on casting the Force of Nature. (I still wonder why Yog joined the MWL soon after. Design space for low strength code gates, they said, as if Enigma, Quandary, Pop-up Window and Yagura didn't see play before).

Whatever, Anarchs decided to sell their souls and swing a sling and they yoglessly crushed the meta. Until the MWL strikes again.

It's funny how Black Orchestra is decent where Yog is bad or unable :

Decent. Just decent. Black Orchestra is not the definitive decoder, but Anarchs don't have to have one. It's just an interesting option to fill a gap in their suite.

(Escalation era)
Lupus Yonderboi 245
Gordian Blade breaks DNA Tracker for 7. Paying 6 to Black Orchestra will only break 2 of the 3 subroutines. — Toper 11 Oct 2016
Oh sh— Datasucker to the rescue ! — Lupus Yonderboi 11 Oct 2016
DNA Tracker costs 9 to break with this. The first pump/break doesn't break subs, the second pump/break gets it up to strength and breaks two of the subs. To break the last you'd have to use it again. Or just let the last subroutine fire, saving a credit but taking a net damage. — quailman2101 11 Oct 2016
Unfortunately, I can't edit and don't know why. Also, I wanted to mean Archangel, not Archived Memory. — Lupus Yonderboi 11 Oct 2016
Sorry about that, looks like Toper and I responded about the same time. Didn't mean to restate what was already said. — quailman2101 11 Oct 2016
@quailman2101 : no worry, the same thing happened to me under your DNA Tracker review :) — Lupus Yonderboi 11 Oct 2016
The install from heap ability is really good for anarchs, even if there are some corp counter cards. There are many anarch cards that synergise well with this card of which faust, inject, Maxx and making an entrance are just 4 examples. It's often expensive to use but with so many anarch cards being MWL this is a decent influence-free option. — DGB123 12 Oct 2016
At most, I see this as a backup breaker in a Quetzal E3 deck. That also runs suckers. — Hannibal Rex 12 Oct 2016
I think you should mention that the biggest weakness is Orchestra's inefficiency against SMALL code gates. You cringe every time you get through an Enigma... — Relenzo 14 Oct 2016
Quandary — LynxMegaCorp 14 Oct 2016
Parasite is the best option for small code gates though. Black orchestra can just sit in the heap until needed. — DGB123 14 Oct 2016
Clever comments, thanks to all of you people. — Lupus Yonderboi 14 Oct 2016
3

The really odd bit with both this and Paperclip appears to be their connection to either Omar or Null. Coming along in the same block they should be one or the other's chosen programs but the install from heap aspect doesn't seem to help either one very much.

Looking forward to the third part of this act, they might make a compelling setup for Exile: Streethawk if the influence costs don't break the bank for him.

(Escalation era)
killj0y 60
They work nicely with Null because you can discard them from your grip to lower the strength of the ICE and then immediately install them. — YourGo 14 Oct 2016
While Paperclip and Black Orchestra do synergize nicely with Null, you unfortunately wouldn't be able to discard and install them on the same encounter as YourGo suggests - the breakers need to already be in the heap when you encounter the ICE. — Sorden 15 Oct 2016
See that's what I thought, they're not huge memory hogs and they don't have a natural self trash point like lady or rex. You could run them with Maxx and just hope they get dumped early. Or you could run a bunch of deck thinners to get them there more quickly. But having to pay their whole cost from heap isn't great when you have to wait for a gear check to trigger them. — killj0y 15 Oct 2016
Install from heap may be more useful for Omar, if you're running Obelus (extra card draw, you're likely to overdraw, so Paperclip and Black Orchestra are good options to discard in that way). And, given the pressure he naturally puts on central servers, being able to bring out a breaker on demand when encountering ICE seems like an effective way of adding to that pressure. — N0-1_H3r3 15 Oct 2016
these breakers make Inject better than ever : more money, no drawbacks — Him 16 Oct 2016
Use Wyrm to beat the gearcheck the first time, then install the proper breaker? Wait, hang on, that sentence starts with "Use Wyrm" — LordRandomness 16 Oct 2016
Official clarification would be useful, but I think Null could trash and then install Black Orchestra or Paperclip. Both trigger on encounter, and simultaneous triggers are chosen and resolved sequentially, so I think you can choose and resolve Null's trigger, then choose and resolve Black Orchestra's trigger. — Toper 17 Oct 2016
I don't think so; a similar scenario happens where you can't take money from Daily Casts on the same turn that you install it with The Supplier. Black Orchestra has to already be in the heap in order for its ability to trigger at all. — tmoiynmwg 19 Oct 2016