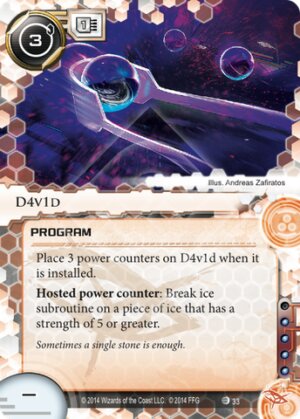 Place 3 power counters on D4v1d when it is installed.

Hosted power counter: Break ice subroutine on a piece of ice that has a strength of 5 or greater.

Sometimes a single stone is enough.
Illustrated by Andreas Zafiratos
Decklists with this card

(The Source era)
PaxCecilia 285
I really wonder why this program doesn't have the subtype Icebreaker, since this is essentially what it does... — Krams 4 Aug 2015
I imagine it would be too confusing when it came time to deal with adding strength to something that doesn't need strength to operate. — GordonsBeard 2 Sep 2015
More importantly you wouldn't be able to host it on Djinn. — MasterPrudent 22 Sep 2015
Also, it's not an AI so it passess stuff like Turing. — ur23 28 Sep 2015
Note that the 4 and 1 in "D4V1D" are replacing the letters A and I. Also, this is clearly a reference (4+1=5, amirite?) to the character Da5id in Neal Stephenson's "Snow Crash". — raygillgumm 5 Jan 2016
Yeah, icebreakers need a strength equal to or higher than the strength of the ICE they are targeting in order to be allowed to interact with it at all, which kind of defeats the point of this card. That said, not being an icebreaker leads to some weird interactions with certain corp cards that target icebreakers... — LordRandomness 27 Jan 2016
Does removing a power counter from D4V1D count as using a program? Wondering about how it interacts with Vikram 1.0 in a situation where you want to let the first sub of Vikram fire. — GoldenHawk 7 Feb 2016
Hey GoldenHawk: — PaxCecilia 11 Feb 2016
Oops, I hope that didn't mess up! Accidentally clicked enter before I wrote the answer. Paid abilities (such as breaking subroutines with D4v1d) count as "using" programs. I believe there is a definition of "use" in the FAQ or possible on ANCUR's Unofficial FAQ. I would venture that anything that doesn't happen automatically counts as use. Like "using" recurring credits on Multithreader. — PaxCecilia 11 Feb 2016
It's like Grappling Hook, in that it breaks subroutines without being an ice breaker. It doesn't need to match the strength of the ice encountered. — quailman2101 15 Apr 2016
Does Navi Mumbai City Grid turn this off and prevent them spending Hosted Counters? — Gilbod 18 May 2016
Gilbod, yes, it does. — nandemo 26 Jun 2016