When the Runner encounters Pop-up Window, you gain 1credit.

subroutine End the run unless the Runner pays 1credit.

"Try to close it. Go on. See what it does." -Chaos Theory
NBN • Christina Davis • Cyber Exodus 56
All sets:
Links: Decklists | ANCUR 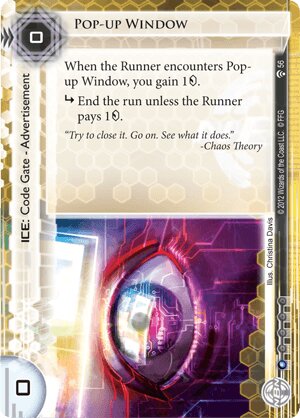 Pop-Up Window is one of the best and most versatile pieces of ICE in the game.

It might not look like it, but it has a huge amount of stopping power. Early in the game paying one credit is a lot and giving one extra to the Corp is even worse. It slows the Runner and speeds the Corporation at the same time, so even if the Runner has the economy to not be bothered by it, it might not afford the speed boost it gives the Corporation. Consider that the moment the Runner crosses it twice it has given the Corp the equivalent of a Hedge Fund, without them ever spending a click!

And they are often stacked, which is specially worrysome. Crossing a single Pop-Up once is tolerable. Crossing two a couple of times is a huge swing credit swing that will let the Corp rez something nasty, like SanSan City Grid or Tollbooth which helps them gain back what they lost to those accesses. And the servers they are on become very taxing with the addition of some cheap pieces of ICE like Caduceus or Viper which keeps them from being too easy to exploit.

Pop-Up is also impactful enough to be great on a less traveled servers. For example, it's a great way to protect utility upgrades and assets. Cards like Daily Bussiness Show will inevitably get trashed, so sticking them one after the other behind a single Pop-Up will exhaust the Runner at an increased rate while giving the Corp enough money to keep dropping cards.

It also pairs extremely well with cards like NAPD, Midseason Replacements and Manhunt because a one credit difference can end up being very meaningful.

Pop-Up Window has, though, a very important limitation that comes through deckbuilding: It needs porous servers to shine and not all decks can afford to do so. For example, it's a terrible choice for Glacier decks because it's small effect won't compensate its installation costs and it's also bad for Scorch flatline decks because the Runner just won't run over centrals very often. But it's great for decks that don't care if a Runner gets in like NBN Fast Advance or Jinteki PE.

As a Runner, don't be afraid to killing it with Parasite and avoid build-ups of two or more Pop-Ups unless you have multiaccess and money to attack elsewhere.

This ICE captures the spirit of pop-up windows perfectly: draining for the recipient and generates some wealth for you! This will almost never stop the runner, but it has the ability to get the Corp a lot of money over the course of the game.

It's very effective against runners who rely on Desperado, Security Testing or other economy from running. It's much more useful early game, the install costs of placing this ICE deep would greatly affect its cash flows. Hope for one early and watch the ad money flow! They'll be praying for Adblocker.