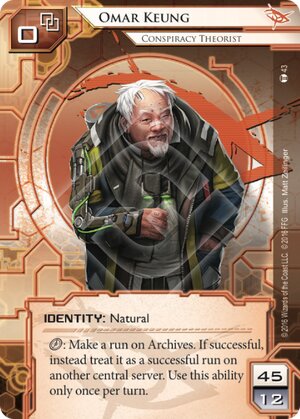 click: Run Archives. If that run would be declared successful, change the attacked server to HQ or R&D for the remainder of that run. Use this ability only once per turn.

A powerful ability! It's like having a Sneakdoor Beta built in, only better. But also worse. Worse because the ability is only usable once per turn but whatevs. Better because it can be used on R&D or HQ and you don't have to choose which until the run is successful! So what are some good synergies?

-Props to YourGo for posting the synergy with Find the Truth. It'll eat up a forth of his influence but it may well be worth it. Make your run on Archives and use Find the Truth as soon as successful. Is the top card of R&D a tasty agenda? Go get it! Is it a Snare or stupid operation? If so take your chances at HQ.

-Bhagat is just a really good card. Now even easier to use!!!

-The standard Corp must put up a decent defense on four servers to have a chance of scoring versus Omar. This will spread their ICE thin. This opens a number of opportunities. First, you may have a couple free accesses early game. Maybe you'll grab an agenda or two. Second, events like Quest Completed and Notoriety become more playable. If they have both HQ and R&D ICED you only have to get directly into one of them to get at all three servers. Especially early game you may be able to pull this off. Third: ICE destruction is POTENT. Already spread thin, certain Corps in particular will have a tough time as their ICE is destroyed. Parasites and the cutlery events will be a great addition to Omar's arsenal (the cutlery in particular as his influence is low). My first attempt with him is an Eater deck with some cutlery events, Quest Completed, Notoriety, and a copy each of Medium and Nerve Agent.

-Cards that trigger on successful run can be easier to activate. Use Temüjin Contract while actually making useful runs. Medium and Nerve Agent are an easy and effective includes. Want to access even more cards? Add The Turning Wheel. You will probably want to avoid event based access cards as these can't be combined with your ID ability.

-Obelus is perhaps the go to console of choice. It is easy to get free draws with this equipped. Grimoire is still a great choice though. Especially if you have Medium and Nerve Agent and need the extra MU.

All in all a great ID and a fun one to play around with. The lower influence is definitely warranted with such a powerful ability.

(Escalation era)
quailman2101 270
One interesting thing to note is that while the mechanics of Omar and Sneakdoor are similar, they usually play very differently - Omar is telegraphed and results in the corp spreading itself thin as quailman2101 describes, while Sneakdoor tends to give you a burst of free HQ accesses if the corp doesn't know whether the runner's deck contains a Sneakdoor or not. On the other hand, Sneakdoor transforms into a weaker Omar if the corp knows it's coming. One of the things I love about Netrunner is how differently matches play out in face of what information is available to the players. — Sorden 17 Oct 2016