"A sysop is not just a cog in the corporate machine. They have dreams-and nightmares-just like the rest of us." -Kate "Mac" McCaffrey
NBN • Liiga Smilshkalne • Chrome City 57
All sets:
Links: Decklists | ANCUR 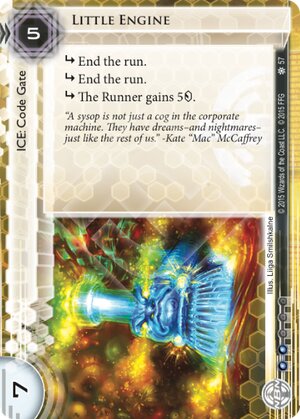 I just wanted to add that Little Engine makes Noise players cry out in anguish, grab their copy of Faust off the table, and eat it with nothing to wash it down but their own tears.

Like, sleeve and all. Just "well I guess this is my life now" hormf gormf gormf

(The Universe of Tomorrow era)
Chuftbot 816
Sometimes I don't want to convert 5 cards into 5 credits, especially when these cards are already worth a mill and a few credits after a pawn. — Kronosdev 28 Sep 2015
Put a Chum in front of it and giggle — Shockwave 3 Oct 2015
This card exists to tech against Faust and little else. There are cheaper gear-checks and it doesn't tax the runner. — PentagonJR 20 Nov 2015
I would consider Lil 'Gine a double-gearcheck - it requires the runner to have a decoder AND 7-8 credits. That's about the same threshold as Tollbooth, but 3 creds cheaper to rez. Love this card in Spark: "oh, thought you had just enough creds to break the Engine? This Launch Campaign over here says otherwise..." — PureFlight 3 May 2016
16

This is an interesting card, mechanically as well as thematically. Before addressing the various elephants in the room, it's worth thinking about the big upside the Little Engine has to offer. Against Gordian Blade and ZU.13 it's a respectable net cost to break: 2 with Gord, 3 with Zu. It also comes with a powerful kicker in the form of a large up-front cost to break. Although the runner gets most of their money back they still have to have a bunch of it to get up the hill. This means that the Engine's natural home is as the innermost ice on a server - you want to tax them a before they hit it. It also means the Engine can create scoring windows - when the runner is poor it will punch above its weight to keep them out.

The other breaker that the Engine excels against is Yog.0. Net-Ready Eyes will not help them. On the other hand, if the runner has Yog, they almost certainly have a separate answer to the Engine. D4v1d pays for itself with a profit of 2 and a power counter to spare when fighting this particular Goliath, while Knight pays the runner 1 each time they pass. Against this sort of breaker suite, the Engine is a gear check. Not useless, but more taxing on the corp than on the runner in the long run.

That's only the start of the Engine's troubles. Cyber-Cypher and Torch both break it for free providing the runner has 5, so effectively the corp is just reminding runners who use those breakers to keep enough money on hand to steal NAPD. Refractor pays a tidy profit, converting the runner's ephemeral stealth credits into hard cash. Stimhack runs enjoy a similar temporary-money-into-permanent-money boon, which is a big issue considering the common inclusion of that card in the dominant Prepaid Kate archetype. Lastly, Grappling Hook makes the Engine very sad. That's not a big issue now, but Geist might run it.

So is the Engine good enough? Given all of its problems and the obvious negative comparison with Tollbooth it's tempting to say no. It's considerably cheaper than Tollbooth though, and has a couple of admittedly minor advantages over it (Like being outside the practical range of 4tman with Datasucker). That makes it worth considering on its own merits. The fact is that not every deck will be packing the answers I've discussed. Some will just have Gordian or Zu. Some will have to break the Engine with Passport, Rex or Eater. Those decks will be unhappy to see it.

In conclusion due to its many deeply unfortunate problems the Little Engine will never be the centre piece of a codegate suite, but that doesn't make it worthless. As a one-of it has the potential to do good work in some match-ups. Sometimes you will discard it if you know or suspect the runner has a strong answer to it, but sometimes you will be glad to see it.

(Chrome City era)
Greasythumb 351
I think this is it. It's a card that is disguising as a weaker piece of ice, but the runner has to be able to get over the hill. So, I agree that it's worth considering as a one-of, for those breaker suites that make it a tall hill — Clutchpedal 7 Jun 2015
I think Little Engine is a card you can design to maximise. You're right to say that it can punch above its weight in certain scenarios and create scoring windows... that's a pretty good thing to be able to do. — Satellite Uplink 10 Jun 2015
Didn't realise pressing 'enter' would end my comment! So anyway, current NBN decks are largely Fast Advance/Kill and don't need Little Engine, but if anything approaching a taxing NBN deck turns up then Little Engine becomes a real player - if you can bankrupt the runner than Little Engine is probably worth a turn of unbreakable ETR to push agendas through. Pretty good. — Satellite Uplink 10 Jun 2015
Install a Chum in front of this and watch your opponent cry. — Thaddux 23 Jun 2015
Thaddux... that is brilliant. — KitsuAeryn 25 Jun 2015
Sometimes... not if your opponent is running Gordian. — Greasythumb 25 Jun 2015
Since the breaking of subroutines happens at step 3.1 you can theoretically end the run after the runner has broken the subroutines before the gain 5c fires by using a Nisei MK2 token! That is if you can spare one for letting the runner loose about 7c. — Capstone 15 Sep 2015
It works well with corporate troubleshooter and patch — Von Elsner 20 Oct 2015
Endless Hunger and Street Magic both screw this pretty hard now, too. If there's not enough tax in front of it then Street Magic lets the Runner use it as an econ engine! — LordRandomness 1 Feb 2016
Runner use it as an Econ engine. Nice. Even if the pun was unintentional. — MightyToenail 24 Mar 2016