When your turn begins, you may install 1 card from your grip facedown. 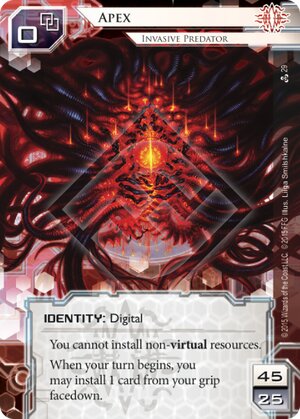 I love this guy. He turns the game on its head.

His signature icebreaker, Endless Hunger, gets through an astonishing number of ice for dirt cheap. Particularly when paired with e3 Feedback Implants. On the other hand, ice that anyone else would find trivial, he is powerless against. (Nothing quite like being kept out of a server by a 0-strength Resistor)

His signature console, Heartbeat, offers unprecedented levels of damage protection. He is not easy to flatline, and having something that can fend off brain damage as easily as net damage is a little crazy.

And if the board gets out of hand, he's the only one who can easily afford to include a few copies of the game-changing Apocalypse card without spending influence. So he's likely to have a few of those about as well, wiping away glacial scoring servers and horizontal asset spam with equal ease.

His ID ability allows him to easily keep his icebreaker and console fed. 25 influence gives him a lot of room for goodies. Unfortunately though, he needs it, because his "no non-virtual resources" limitation actually turns out to be, well, extremely limiting.

Most of your influence budget will most likely go to card draw and economy. Without being able to install Daily Casts or Armitage Codebusting, you're limited to mostly event-based econ. You need solid card draw to power his ID ability, (which in turn powers everything else he has) but the glamorous Earthrise Hotel refuses to serve sentient internet viruses, he can't really form Professional Contacts, and Drug Dealers won't even give him the time of day. Most likely you'll end up having to import Quality Time, Diesel, or possibly even Safety First.

He definitely has his flaws. I don't think he (or any of the neutral runners from Data and Destiny, for that matter) will ever really become top tier decks. But the bottom line is: even so, he forces the corp to play a very different game than the one they were probably banking on, and that can be a pretty useful thing in a runner.

(Data and Destiny era)
Bwob 437
I like running him with #Always Be Running to take care of the ICE that #Endless Hunger can't break. It also synergizes well with #e3 Feedback Implants. — swangner 25 Dec 2015
Question: can Uninstall bring me back face down installed programs? — feeling 12 Jan 2016
@feeling No, Uninstall can only return programs or hardware. Facedown cards are considered blank, so they cannot be returned. — andrewboydston 12 Jan 2016
So then what's the point of me putting my cards face down if I can't bring them back to use them later on, unless I'm using them for a bluff? — potatotomatocarrot 11 Jun 2016
@potatotomatocarrot, cards installed facedown can be used to feed his programs and console. Once they are in the trash you can use a bit of recursion to bring them back. — lunchmoney 17 Jun 2016
And you get them in the trash by feeding your program and console, selling them to Aesop's or using a Chopbot. — lunchmoney 17 Jun 2016
@lunchmoney. I see now. That's cool. I'll look for this beast now — potatotomatocarrot 20 Jun 2016
You cannot use Aesop, as it is a non-virtual resource. — RvdH83 27 Jul 2016
@RvdH83 - good point, well made :) — lunchmoney 17 Aug 2016
I think with Reaver his kinda viable, one thing tho is, I see him as an AI that is just looming...one wrong card printed he could spring! — rezwits 4 Jan 2017
Do cards like turning wheel when installed retain counters when they are turned upside down? — Billrye 2 Oct 2017
5

Just a quick note. Adjusted Matrix + Endless Hunger + e3 Feedback Implants might be an interesting combination considering the 11 strength of EH. Some Out of the Ashes for those turns where you want to Apocalypse and so on. Might make Endless Hunger a really good breaker and maybe give Apex another lease on life.

(Daedalus Complex era)
tendermovement 44
At least until e3 Feedback Implants rotates (as far as tournament players are concerned). — LynxMegaCorp 26 Feb 2017
Adjusted Matrix will enable a lot of shenanigans. Specifically I think it'll bring back the Quetzal, E3, Cutlery deck, taking the place of Always Be Running (and doing a much better job). Using it with Apocalypse could work, especially with Out of the Ashes, but it will be a real pain losing it after the Apoc. — quailman2101 26 Feb 2017
One way of getting through ICE with Apex, that I've wanted to try is EH w/ Adjusted Matrix, then throw in Street Magic & Tracker. Kill any EtR subs, prevent one from firing, and/or rearrange in the desired order. — Drakeheart 12 Oct 2017
3

Piloted this in DFW Texas's start of a onesies-variant league to interesting effect ("signature" addendum to MWL rules, prohibiting the use of certain cards out of faction, minus with The Professor: Keeper of Knowledge). There were a few places I slipped up, design approaches I could do better, but Apex: Invasive Predator shines in such a deliberately restrictive format.

Mostly because everybody else is similarly restricted. Thus the danger. Under standard constructed formats, tools against Apex's gameplan are fairly easy to access, limiting its danger. Under 1.1.1.1, the ICE and effects you'd normally rely upon aren't necessarily on-hand. The countermeasures you'd normally run to keep Prey from trashing its way through your defenses -- they aren't there.

Of note: I'd decided to squeeze in Dirty Laundry over e3 Feedback Implants in my approach, favoring Always Be Running instead of e3s, and that proved fortuitous. Apex isn't necessarily money-hungry, but having spare change to trash resources is welcomed. And if you're only running Endless Hunger instead of a more traditional icebreaker suite, you're going to run into ice without ETR subroutines for you to work e3 magic with. ABR, on the other hand, is agnostic to subroutine text or ice type, and makes it easier to safely push a Prey through.

Definitely consider a recursion gameplan, though. Not sure if the Déjà Vus are cutting it. I'm getting rreeaally close to decking myself in every game thus far. Levy AR Lab Access costs so much influence, though...