The Runner may spend click to break any subroutine on Eli 1.0.

"That's against the rules. The Creators will be angry."
Haas-Bioroid • Sandara Tang • Future Proof 110
All sets:
Links: Decklists | ANCUR 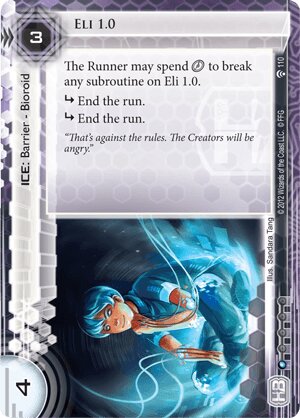 Eli is probably the most taxing ICE in the game relative to its very low rez cost. Everyone's favourite fracter Corroder takes 4 to get through this, as do Breach and Eater. Currently the best ways to deal with it are:

As a bioroid, the Runner can spend 2 to break it, but this isn't really a downside as getting the Runner to spend half their turn's clicks on one cheap ICE is a huge tax. This kind of ICE is not really meant for defending scoring remotes, but rather to prevent the Runner repeatedly running R&D or HQ.

At only 1 influence, Eli is included in just about every taxing Corp deck. Even when you aren't focusing on taxing the Runner it can be a value include to prevent central server abuse from cards like Keyhole.

(Chrome City era)
MC729 25
Eli is an untrustworthy piece of ice to protect your centrals by itself, or paired with other bioroids unless they too are barriers, as being able to spend 2 clicks to land an account siphon or a vamp, or legwork or indexing...you see where I'm going with this. 2 Eli's is more like it, but at that point I'd rather go with bastion. I'm the only person in the world that doesn't really like Eli. — cmcadvanced 11 Jun 2015
It's definitely not good as the sole ice protecting HQ, but that's not really its job. It's a big tax, which is strong in itself even if it doesn't keep the runner out when unsupported. On R&D Maker's Eye and Keyhole runs are still an issue (although they're much less good when it costs three clicks) but Indexing requires a fracter to do its job because of the need for a second run. Ultimately, Netrunner would be a rubbish game if the Corp could reliably keep the Runner out. Corp play is about minimising the number and effectiveness of Runner accesses. Eli strongly supports that over the course of the whole game. — Greasythumb 12 Jun 2015
Morning star? — fetish 10 Nov 2015
If the runner clicks through Eli 1.0 for an account siphon then they will have to float tags though, so it's a good play if they have valuable resources to trash or if you have scorch in hand. — Ebrey 9 Dec 2015