When you install Atman, you may pay Xcredit to place X power counters on Atman.

Atman has +1 strength for each power counter on it.

1credit: Break ice subroutine on a piece of ice that has strength equal to Atman's strength.

We are shaped by our thoughts; we become what we think.
Shaper • Diana Martinez • Creation and Control 40
All sets:
Links: Decklists | ANCUR 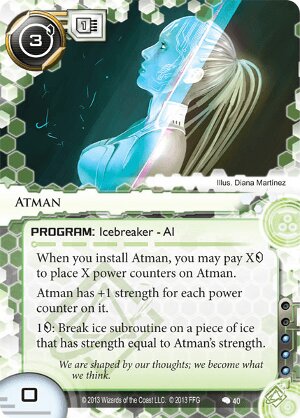 At 3+ install cost, Atman can be tailor made to target all instances of ice that share a particular level of strength. It is however inflexibly unable to target ice that is higher OR LOWER than this tailor setting. It's common for runners using Atman to install several copies of it forcing Corp players to diversify the strength of their ices when building their decks.

Atman is one of the few ice breakers that actually combos with itself. Runners makes sense to have more than one copies installed simultaneously. This strategy allows the runner to target multiple strength levels of ice

Plugging holes: with a suite of Atmans installed at different strengths, Datasucker can potentially be used to fill in the cracks. Additionally for Anarch, Mimic, Yog.0 & D4v1d could add more efficiency to such a strategy.

Atman can be installed in the early game to deal with a specific hole in the runners deck, then trashed to make room for other programs and then brought back (to deal with an end-game headache) from the heap with recurring cards like Retrieval Run, Clone Chip, Déjà Vu, Test Run, Scavenge or Trope but watch out for Blacklist or Chronos Project!

Similar to Femme Fatale, the runner has lots of control in targeting ice, being able to custom create an instance ofAtman to deal efficiently with a specific level of ice is why Atman has been so popular in the past.

Big taxing ice like Orion, Wotan etc can be much more efficiently managed with Atman targeting it at significant savings especially if the ice is guarding a server like R&D or HQ where the runner may wish to run repeatedly.

As an AI ice breaker, Atman can break nearly every ice out there

Advance-able or otherwise adjustable strength ice such as Shadow, NEXT Bronze, Quicksand, Resistor, IQ, Fire Wall, Hadrian's Wall, Ice Wall can give a headache to any runner relying specifically on #atman as their AI of choice.

Can be an interesting Shaper auxiliary ice breaker and possibly cheaper to install & certainly cheaper to use in many cases compared to others. It's inflexibility however makes Atman extra challenging to pilot. It's cons are pretty tough to overcome which is probably why this card hasn't been reviewed up until now.

(Data and Destiny era)
chris_walker 639
Would like to point out, that Wyrm needs to raise it's strength to be equal with the ICE, before it can lower ICE's strength, so it might be fantastically inefficient. Also, I don't really see why you compare it to Femme. Femme is not an AI, so it'll allow you to bypass only one ICE and break sentries, while Atman can potentially break anything, except anti-AI ICE. — Shieldwall 28 Nov 2015
Another important combo card is Datasucker, which is a much more common card to decrease ICE strength than Wyrm. Also, in Anarch, Mimic and Yog.0 are often used to handle ICE with strength up to 3 and d4v1d for everything strength 5 and upwards, letting Atman handle all the ICE with exactly 4 strength. — Krams 28 Nov 2015
Also, Atman used to be pretty popular, because you can just install several copies with different strength and use Datasucker to combat any deviations. When you do that, Atman becomes surprisingly efficient, cause you only pay for subroutines. I know, it might seem kind of scary to rely on such a specifically set breakers, but if you check the most popular ICE, you'll see, that it's usually enough to have 3 different Atmans + Datasucker to break any given ICE composition, excepting Ice, Fire and Hadrian's Walls. Also, from my experience, people rarely bother hyper-advancing walls, cause it wastes time and money. — Shieldwall 28 Nov 2015
Atman remains a strong auxiliary breaker to pop against ices your rig has hard time to manage. It's also the reason why when building a Corp deck, players take care to diversify the strength of their ices. That makes of it a meta-defining card. — Lupus Yonderboi 28 Nov 2015
Thanks guys, totally been mis-reading proper use of Wyrm. All references to Wyrm have been removed from review. I agree, Femme Fatales conventional ice breaking is indeed Sentry only, however it's installed ability can target any installed piece of ice and break its subroutines regardless of subroutine type.. right? I've cut out 2 of the 3 references to Femme but thinking most of what was said was fine. Thanks to Shieldwall & Lupus Yonderboi, I like the new introduction even better. — chris_walker 28 Nov 2015
Krams, thanks for the combo with Mimic and Yog,0 I've added those to the review too. — chris_walker 29 Nov 2015
Atman is 3c to crack any ice for 1c/subroutine with Sifr. MAYBE GOOD. — obscurica 25 Jan 2017
7

It totally blew my mind when I recently heard that Atman and Brahman are concepts in hinduistic philosophy that are related to each other and are in my view represented by both card's machanics. Brahman is the transcendet self, the universal energy; Atman is the individual self that wants to merge into Brahman to be finally liberated to step off the cycle of rebirth. Using Atman and Brahman both as breakers make total thematic sense: Atman sets its strength upon install (birth), but can be resetted when Brahman'ed (death, soul goes back into "pool"). Atman can then enter play again with a different strength (rebirth).

Worth pointing out in 2017 that Atman combos with Sifr as a 3-cred near-universal breaker. A two-card skeleton key for the majority of defenses you'll face.

And then you can just slap down another for Lotus Fields and similar.