click: Search R&D for an alliance card, reveal it, and play or install it (paying all costs). Shuffle R&D. 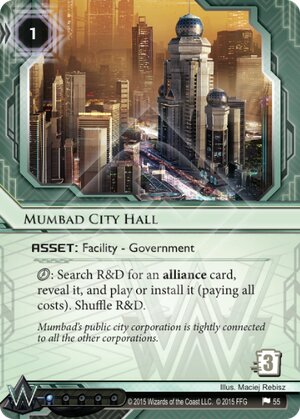 Did Fantasy Flight not realize how much of a pain in the ass this card is going to be for IRL tournaments? Magic the Gathering had a similar card (Sensei's Divining Top), which was banned in formats because it wasted enormous amounts of time. This card can potentially make you search and shuffle your deck 3 times every single turn + the shuffles from the Museums that you will invariably be playing. That in and of itself is going to stretch the already interminable horizontal corp matchup out even further.

In terms of the card itself, I think it's good, possibly even very good. Click compression + tutoring, with targets that corp decks are already playing (Museum of History/Mumbad Temple) sounds like a recipe for success. 1 influence, 1 rez cost and 3 trash cost are about as good as you could hope for. Cards to keep in mind are Heritage Committee (hand sculpting, which is quite powerful with Museum's shuffle) and Jeeves Model Bioroids (possible fast advance implications).

(Democracy and Dogma era)
bracketbot 58
Damon Stone has stated that he really likes the Eater + Keyhole interaction. I'm fairly certain FFG love shuffling. — RubbishyUsername 3 Apr 2016
How is Sensei's Divining Top like this again? — Goldstep 3 Apr 2016
@Goldstep Permanent-based deck manipulation that has ramifications for tournament play re: time. @RubbishyUsername Eater/Keyhole is a good point, but imagine this PLUS Eater Keyhole. You could have to potentially shuffle your deck 8 times between your turn and the runners — bracketbot 3 Apr 2016
I'm not buying it. This is no worse than Levy University as far as shuffling except that it's a lot easier to have 25 ice in the deck that works than 25 alliance cards. — Goldstep 4 Apr 2016
I was talking about tournament play, and Levy isn't exactly relevant there, no offense — bracketbot 4 Apr 2016
If you are going to use it 3 times, there's no practical reason to shuffle your deck. As long as your opponent isn't heartless and doesn't force the card text on you, you can just tutor and install all three cards, then shuffle once. I mean, who in their right mind would shuffle 3 times with 3 museums out... — Sabin76 7 Apr 2016
Heritage Committee is a reason — bracketbot 7 Apr 2016
As @bracketbot points out, you have to shuffle each time because you might play HC on any given trigger. It's maybe the weirdest tutor ever in that you can trigger it & not know what you'll get. What makes it broken IMO is that a) it's unlimited use & b) it installs for you. Compare with Djinn, the only other unlimited tutor—it costs a credit & doesn't install! — phette23 11 Apr 2016
I agree @phette23, it seems pretty broken to me for the same reasons. 2 clicks in 1, repeatedly, for just the 1 credit rez cost. And there are already a bunch of alliance cards released or soon to be released. — quailman2101 27 Apr 2016
I have done the math there can be a total of 27 alliance cards per 54 + deck ( and that would be a janky and most likely be a shitty deck) — Makehate2me 30 Apr 2016
If you have even 6 of em in your deck (Mumba and Museum are powerful cards) this card is nuts. Oh and Jeeves was just released, that's a super good card too. — quailman2101 1 May 2016