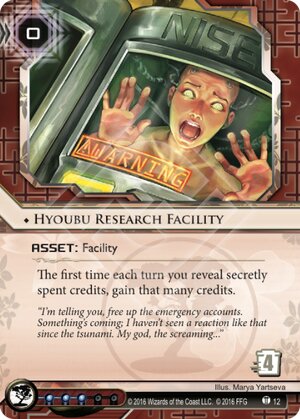 The first time each turn you reveal secretly spent credits, gain that many credits.

"I'm telling you, free up the emergency accounts. Something's coming; I haven't seen a reaction like that since the tsunami. My god, the screaming..."
Illustrated by Marya Yartseva
Decklists with this card

Sure, you still need to have two credits in hand when your Psi game begins, but this card used with Nisei Division makes for a troublesome problem for the runner. Of course, it starts with this -- if the Runner doesn't have 2 credits, you can always win the first game that turn and at virtually no cost to you. But even if they have the money and a 2 isn't automatically a win, what this card does is force a runner to have to pay a tax while you do not. You can spend more freely in general and it changes the part of psi games that doesn't appear in the vacuum. If someone tells you that a Psi Game is like paper-rock-scissors, in that the corp picks one of 3 options and the runner picks one, and for any choice the corp makes, only one of the runner choices will grant them a win, you are mostly right, but you missed the part where a poor runner, cannot win a psi game. Voter Intimidation is feels a little rough if think 1/3 of the time the runner guesses what I paid and nothing happens. But if you were to instead say, "Pay 1 more: A broke runner has no recourse against this. If you are playing Nisei Div, gain a credit." then the card is a little bonkers, doing what you would normally need a tag to achieve. Or Psychic Field? "If a broke runner accesses this card, pay a credit and trash the whole hand."

This card takes the tax out of it for you. Unless the runner is hitting several Psi tests a turn, you can simply declare that The Future Perfect is unstealable unless installed and a scored Dedicated Neural Net is an automatic "Eat My Snare!. But it only works if you have the extra money o make it happen. A persistent runner can still get in once you are broke. This card practically prevents that issue by knocking the runner's teeth in before he even gets to the second Psi test.

As a runner, the only solace I have is that Rumor Mill kills this dead. All hail Princess Space Kitten!