This card costs 0 influence if you have 6 or more non-alliance nbn cards in your deck.

As an additional cost to rez Ibrahim Salem, forfeit an agenda.

When your turn begins, name a card type. Look at the Runner's grip and trash 1 card in it of the named type. 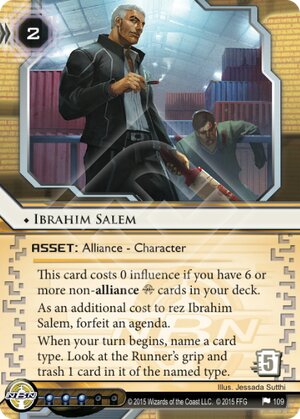 In the current Rumor Mill meta, Ibrahim Salem is hilarious as the one unique asset that has an additional rez cost. Rez him without forefitting an agenda, then score a Breaking News or start up a new current. Hope they can trash him or play a new current!

Destroy their economy, destroy their ability to get into the server, then start scoring out!

Have you considered comboing with Blacklist? Use those, Wraparound, and Jackson Howard to hit the alliance requirement and suddenly Ibrahim can start showing up in all sorts of wacky corporations.

EDIT: For a short while, the Rumor Mill play was ruled incorrect. Now it's back to correct again. Thanks, Damon!

Incredibly powerful effect for a pretty steep cost. Combos well with Salem's Hospitality: rez this when your turn starts, see the problematic pieces they hold, then show 'em a little kindness and ruin the runner's best laid plans.

It's downside, like all assets that require agenda forfeiting, is, well, that thing I just said. It's an asset that requires a pretty steep buy-in, and while 5 creds is a substantial demand to trash from (almost) any runner, as soon as this thing is rezzed, it's the runner's priority 1 target. If this thing is in your deck, absolutely make sure you have some ice or an identity that keeps it around as long as possible.

Or you could just put this and Corporate Town into a Custom Biotics: Engineered for Success deck, use Eliza's Toybox (maybe throw in some Domestic Sleepers for good measure), and go hog wild. Probably won't work too well, but the look on the runner's face as their world comes crumbling down will be beautiful.