Use these credits to advance, install, and rez cards.

They said it couldn't be built. That it was a fantasy. That Jack Weyland was a fool, and he had bought the fools in Washington too. But year after year the buckyweave grew, and 'they' stopped talking.
Weyland Consortium • Alex Kim • Upstalk 8
All sets:
Links: Decklists | ANCUR 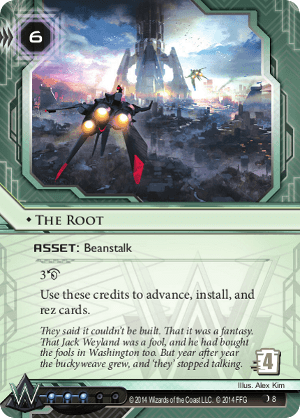 I never really liked this card when it got released. It first got my attention when my local playgroup started to use it with Blue Sun: Powering the Future. Blue sun was the hype card around here and of course I had to try my own version. I included The Root in it. I didn't like it. All the time I used it the wrong way...

The Root really shines if you playing with several remote servers, including already expensive to trash cards like SanSan City Grid, PAD Campaign, Marked Accounts or even Adonis Campaign.

I think it harmonizes best with Gagarin Deep Space: Expanding the Horizon. I also can imagine to splash this card in HB decks though.

The most beautiful combinations you can make with this card: 1. Rez it at the end of the runners turn. Use it to rez SanSan City Grid for 3. In your turn use the recurring creds to score an Project Atlas or Superior Cyberwalls for free. This means you got 5 creds back already and still have 1 cred on it for the runners next turn. If he chooses to run for it you can use that 1 remaining credit to rez an ice protecting it. The runner will have to pay for breaking that ice, pay 1 to access it and trash it for 4. So the runner just lost 6-7 creds and a click for the run. You basically lost nothing and the SanSan is still in game. If the runner goes for SanSan instead and doesn't trash The Root you will get another 3 creds/turn. Brutal. 2. Use it to rez your economy assets like PAD Campaign or Adonis Campaign. 3. Protect yourself against Account Siphon by spending 6 on rezing it and use the 3 creds to rez Crisium Grid. The runner won't have money to trash both. 4. Use the creds to advance Fire Wall or Ice Wall to insanity and score big money with Commercialization.

There is just so much potential in this card! A must in all Gagarin decks, and highly recommended in asset heavy decks. Use it to rez Dedicated Response Team for example...

(Order and Chaos era)
Neuro 95
It actually combos nicely with Server Diagnostics in blue sun also as your can res the Server Diagnostics at end or runners turn using Root credits gain the 2 credits from Server Diagnostics then return it to your hand getting 3 credits back and now your root has full credits again, essentially netting you 5 credits for 1 click. — Pinkwarrior 27 Apr 2015
2

(Order and Chaos era)
Ber 2522
Re your last **Notable interaction**: It's a little unclear what you mean. Do you mean in addition to using it this way with EBC? Or just in general, you can rez it, use the credits, and then on your next start of turn bounce it back? — jakodrako 18 Feb 2015
Yeah, I think I was trying to say in Blue Sun with 6 credits on hand, you could rez this, use the 3 credits from this to rez something else, then use the blue sun trick to pull it back and regain the 6 credits. But it's not that great really, I'll remove that point. — Ber 20 Feb 2015
Well, you can rez it end of turn, use credits, use credits start of turn, then bounce. If you leave it down for one more turn, you're making a profit. — JAK 22 Feb 2015
1

The Root is a surprisingly good economic asset. At home in glacier decks, it’s flexible utility can mean a Beanstalk Royalties every turn. It may be thought about in terms of Prepaid VoicePAD; It pays you for what you want to do already: install ice, rez defences, and score agendas. The Root can also help leverage an economic advantage. With Blue Sun: Powering the Future, any remaining credits on The Root can be converted into real credits by rezzing upgrades like Crisium Grid and Ash. Adonis Campaign becomes even more threatening by turning him into, at most, a six credit gain every turn. The Root in concert with Executive Boot Camp can also squeeze more value into your ice by turning empty Hives into four credit gains by rezzing them at a steep discount and pulling them back with Blue Sun. It has does a few downsides. It’s rez to trash ratio is unfavorable early because it is a six credit investment for a moderate tax, and it takes a few turns before it pays for itself. The best window to catch The Root as the Runner is like the sexbots; right after rezzing and before it’s been used. Finally, it competes for deckspace with Midseasons/SEA Scorch. That said, The Root has a home in decks who want to leverage an economic advantage into locked down servers and breezy scoring.

(Breaker Bay era)
LordWei 4
Rez-to-trash cost is not so bad because usually you would only rez it when you can immediately use those recurring credits. This makes it effectively 3 rez / 4 trash, which is better, only need to use it once more to have got solid value from it. — Ber 27 Apr 2015