The Runner must pay 1credit as an additional cost each time he or she uses an icebreaker to break at least 1 subroutine during a run on this server.

Halfway upstalk, Midway is a destination unto itself with its microgravity hotels and fine dining options.
NBN • Emilio Rodriguez • Upstalk 7
All sets:
Links: Decklists | ANCUR 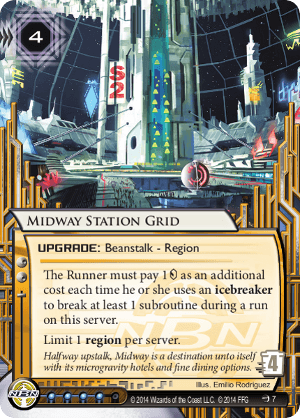 This card is a complete tragedy. Reading the text, the card is amazing. And yeah, it is. One more to break all subroutines on ice in this server! That's crazy! But it's in NBN, the faction with a total of two ice with more than one subroutine (Muckraker and Uroboros). Plus, almost every NBN deck is either Fast Advance or Tagstorm, which can't use this card effectively.

However... the card still has use. While it's four influence, I can see it finding its way into RP or Weyland Glacier. (I don't see it doing well in Haas Bioroid, where the runner can click through rather than pay the double cost) Sure, it's hard to fit into a deck, but it can singlehandedly lock down a server.

(It's also worth saying NBN Glacier could potentially be a thing with this card, Shoot the Moon, and potential support coming out in the SanSan Cycle. Right now it's probably not viable, but it's worth noting.)

(All That Remains era)
AwkwardPizza 62
Actually, the runner can pay clicks to *break* Bioroid ice subroutines, so they have to pay a click and a credit with this region. — skjenolc 15 Aug 2015
I don't think that's correct. The card text very specifically says "when he or she uses an ICEBREAKER" instead of just "when he or she breaks a subroutine." This card would have zero effect on a runner clicking through a bioroid, as they are spending a click to break and not using an icebreaker. — GrantZilla1979 15 Aug 2015
e3 Feedback Implants also makes this card difficult to justify. — Pikeman 4 Oct 2015
Important note: D4v1d is not an Icebreaker and so does not get affected by this. This reinforces the grid's strength at shoring up high-subroutine low-power taxing ICE. Might breathe new life into some traditionally Yoggable pieces. — LordRandomness 26 Jan 2016
3

Midway Station Grid is an enigma wrapped inside a riddle smashed over the dying embers of a bioroid you thought you could break. While its true this card is hard to play in faction, 2 subroutine ice tend to be easy imports, and that means you're taxing the runner 2 for every ice on your server. A couple bioroids and this gets much worse. This card would be great in RP if it didn't block the import of important ice, but in HB, where that ice all lives, or in NEH where you can import it it does its job well.

Still its not well positioned. Lady, Morningstar, Switchblade, Faerie. All of these cards break a lot of the multiple sub ice you'd throw in front of people and they're all becoming more popular. The rez cost means you have to think pretty hard about whether you want to install it or not, let alone rez it when the time comes. That said, the trash cost is pretty good when you consider its 4 + x, where x is the number of subroutines on your server.

In the end, NBN has some of the most taxing cards in the game and Midway Station grid is no exception, but you're going to have to work for it quite a bit.

You should acknowledge that Information Overload exists, too, alongside Muckracker and Uroboros. Especially since you called out Tagstorm-style NBN decks, and Info Overload is a perfect fit in such decks.

If the runner has 5 tags, and s/he encounters Information Overload, Midway Station Grid turns that Info Overload into at least 10 credits of tax compared to 5 credits tax (in addition to whatever credits are spent matching the strength). The subroutine of trashing 1 card, regardless of being program/hardware/resource, is serious enough to warrant paying additional money from Midway.

Other than that, good points. I'm just filling a gap you've missed.