Use these credits during traces.

Works better than a PAD hooked up to a tinfoil umbrella and coffee can.
NBN • Lucas Durham • Upstalk 6
All sets:
Links: Decklists | ANCUR 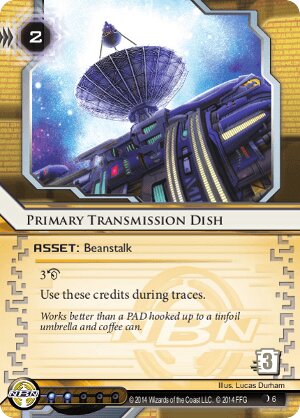 I have noticed 3 informal categories of traces:

1) Subroutines you pay through. IE Burke Bugs against a broke corp, Ichi 1.0 against your Sunny Lebeau deck, Hunter particuarly when you have New Angeles City Hall already installed or have a free click. This card can be worth almost nothing in a case like that. "I see Hunter will cost me 2 and a ... no matter how high the trace."

2) Subroutines you use breakers for. IE If you have out Mimic, you might as well use the bad pub to break Muckraker or Knight on a Checkpoint is a lot cheaper than the trace. Similarly as long as you are already paying for Viktor 2.0's end the run, what is one credit more for the brain damage trace? Catagory 1 can become 2 when you have cards like Primary Transmission Dish out if the runner is pretty sure that it's going to cost them more to beat the trace than just break the ice. In other words, it's a threat of "I will make this trace expensive," not actually credits that you will use a lot. This can be a pretty good tax on the runner. Or it can be a way to go broke for the corp. A lot of tracer ICE has bad pub with it which ruins your ability to tax or is only expensive to break because of high strengths. And you did need to click and 2 cred to use the three credits, so you better hope you have more than one use or you basically clicked for a credit and discarded a card.

3) Traces that aren't subroutines. Ash 2X3ZB9CY or SEA Source. Decks that run these cards, run them as major parts of strategy. Three extra credits for a trace like this at the cost of two and a click to install... again until the second usage, this is basically a way to threaten, not a card to help with econ the way other reoccurring credits like Cloak and PPVP are.

You might think, well, even if it ends up only making back it's cost to install and rez, that's still ok, right? Except there are enough things a runner can do to make you need to protect your asset. Commonly used cards like Security Testing, Dirty Laundry, and Desperado can mean you need to ICE up your remotes... or simply accept a 6 credit swing from 1 click followed by 3 credits on other turns.

There are ways to mitigate the cost -- Executive Boot Camp or License Acquisition or even just getting a card from NEH, but wouldn't you rather use those on a Daily Business Show or a PAD Campaign? In the end, this card is better than Net Police and that's it's big claim to fame.