When your turn begins, you may rez a card, lowering the rez cost by 1credit.

1credit,trash: Search R&D for an asset, reveal it, and add it to HQ. Shuffle R&D.

"Do it again, but this time I want to see you to enunciate less. Maybe let some spittle fly."
Weyland Consortium • Gong Studios • All That Remains 88
All sets:
Links: Decklists | ANCUR 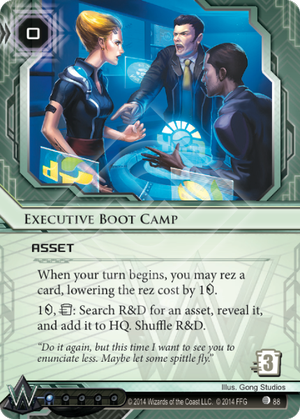 In the right deck, this is almost Jackson Howard levels of utility. Let's look at the similarities. It has 2 abilities, both of which are useful in almost all decks. All decks have ice they'd like to rez at a discount. It's worth noting you can also rez assets and upgrades with this card. So you can do some kung fu like rezzing a PAD Campaign without losing any money. This can be great for a tempo swing. Almost all decks have at least one asset they'd like to go find at will. On top of that, the tutor ability is a clickless trash ability, so this card is nearly untouchable by the runner so long as it's installed. It's safe against Security Testing in an unprotected server. The ability to search for an asset means two things. Obviously you can get the right asset at the right time, but also you can run much lower asset density if your deck was relying on certain assets. There aren't so much drawbacks to this card as there are situational uses. For instance, the rezzing ability isn't very useful if you're looking to surprise a runner. It's much better for rezzing binary ice that is taxing. It's also good if you just want to gear check at a discount in the early game, but the runner doesn't need to waste a click faceplanting into your gear checks. Also, not every deck runs alot of assets. But IF YOU DO run assets and binary ice, there is no reason not to run this card. I use it in my NEXT Foundry deck and it is always an MVP.

(All That Remains era)
RichardLocke 84
Note that if you rez a PAD campaign with this, you don't get the PAD's 1c back immediately as the PC was not rezzed at the start of your turn. — michaeln 3 Dec 2015
Don't both of those effects take place in the action window prior to the Corp's first click? If so, I don't see any reason why you couldn't use EBC to rez a PAD or any other card that gives benefits at start of turn since the Corp decides in what order the effects happen within the same window. — GrantZilla1979 24 Dec 2015
The turn begins effects are all activated at the same time and then you choose the order to resolve. Since the PC wasn't rezzed at the trigger point it doesn't resolve that turn. — butturd 21 Jan 2016
5

For me the best use of this card besides what others have said, and more importantly in my opinion, is that it fucks with Valencia and her blackmailing dependency. I used to use Elizabeth mills but I find this more versatile and it solves the problem nicely.

One thing not mentioned in the other (excellent) reviews below: firing EBC triggers an R&D reshuffle, so it can protect you against Indexing: let them Index, then when they run R&D again to pick up the agenda, fire EBC to reshuffle it away again. Saved my bacon a couple of times!

Paddosan's review, while good, is missing an important component of the card: the cost to search for an asset is 1 credit and a trash, not either/or. This means that the card can only be used for this purpose once, and cannot (for example) search for all three Shocks.

Still good, but not nearly as good as it would be without the trashing requirement.

I'm not sure how much Valencia Estevez/Blackmail decks are going to be a thing, but its good defense versus that as well, allowing non-run ice rezzing. At least good to throw a copy in for the post O&C meta when there's a decent chance of running into her.

The flavor text is awesome.

Another excellent card in an overall very good Data Pack for the Corps, this All That Remains!

There was alread Levy University, so this Executive Boot Camp is not exactly the first corp tutor ever, but it surely is the first good one.

This means it's very good with Blue Sun: Powering the Future, especially if you also have The Root on the table, since it can become a pretty decent source of extra income.

It also works perfectly with the good old Tyrant or Woodcutter (ok, I'm being ironic here, they're not so good on their own, at all). You can basically rez them without having to wait the damn runner passing by, and start pumping them with advancement tokens. Tyrant thus becomes a quite good ice, and with strength 4 is the least susceptible to Parasites.

Given this Asset also costs 3 to trash, it can be rather annoying for the runner, and with just 1 influence point it's easily splashable.

Assets I look forward to tutoring with EBC:

It can see it being good in Blue Sun, not just because you want the Root, but also because there are lots of times you'd like to be able to rez a card just so you can pull it back and deploy it somewhere else. EBC lets you do just that.

I imagine this seeing a lot of play in horizontal decks, as it acts as a kind of mild economy card as well as letting you tutor your best assets to the table.

(Up and Over era)
pruneface 74