Whenever the Runner trashes a Corp card (including Ronald Five), he or she loses click.

"It's our most pirated property ever. Great work, everyone."
Haas-Bioroid • Smirtouille • Old Hollywood 88
All sets:
Links: Decklists | ANCUR 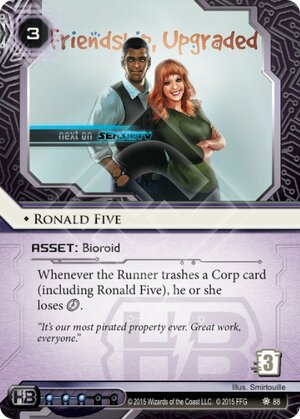 Deceptively strong and a nicely costed, Ronald Five is a universal 'tech' card that conveniently fits into our standard vanilla HB Glacier decks. If you are already thinking of ways to fit in Cybernetics Court, look to ole Ronnie boy instead. Barring any gimmicks, Ronald is an annoyingly strong tax that punishes Parasite, trashing your campaigns, and trashing out of centrals.

I repeat, this works with Parasite ticking down and Keyhole as well.

Ronald Five can also see a bit of wombo-combo with Ash 2X3ZB9CY and Heinlein Grid, exclusively or together. Trashing Ash 2X3ZB9CY typically prompts a second run, but is it possible now that they need 3 clicks instead of 2? Even that trench-coated alley-walking guy whispering sweet nothings about Strongbox has a point now.

But seriously, take your newest standard HB deck and toss in a couple Ronald Five for your auxiliary remote. You'll be pleasantly surprised, he's earned his keep in mine.

(Old Hollywood era)
hi_impact 1709
It's worth mentioning that Ronald forces the runner to lose a click, not spend a click extra. That means Mr. Five doesn't interact with last-click runs. He does, however, interact hilariously with Ryon Knight. — FarCryFromHuman 14 Aug 2015
Say Heinlein and Ronald are both installed in the same server. Couldn't the runner choose to trash Heinlein first, this avoiding Heinlein effect even with Ronald active? I guess I'm just not seeing very much synergy here. Or did you mean a server with Ash and Heinlein together? — WayneMcPain 14 Aug 2015
Ash and Heinlein together. Or just a standalone Ash is a huge pain if they planned on losing the trace. — hi_impact 15 Aug 2015
I don't think it will come up often, bit the fact this card makes you lose a click, not spend it, means it can be negated by Adjusted Chronotype. It is rare to see it in play without Wyldside, though. — Vimes 16 Aug 2015
as it stands this card is awful. It needed to be an addtional cost to trash to make this card viable. The runner can just run last click, and this card has negative effect on bioroids, since if clicking through them they will most likely end up with no clicks and thus lose nothing from this card. It also costs 3 which is crazy expensive for a card that will do nothing except maybe make them lose a click once. — Kamalisk 20 Aug 2015
@Kamalisk I don't think you've looked at this card closely enough. I have had great use out of Ronald. Ronald Five is only going to be rezzed when you get the most use out of him. Couple him with Crisium Grid on your central and the runner must either a) trash the unrezzed Ronald Five, run the central, trash the Crisium Grid, or b) run the central, trash Crisium Grid with Ronald Five rezzed (losing a click). This is a hefty tax on runners trying to Maker's Eye or Account Siphon... So to summarize, he will get rezzed at times when you really want the effect. He is great as a one-of or possibly two-of in taxing decks with annoying upgrades. — Cobura 15 Sep 2015
With a cost of 3 credits, it's the most valuable non-ICE bioroid target for the HB identity "Architects of Tomorrow" — Broye 25 Nov 2016
1

I could maybe see Ronald finding a place in an NBN: Controlling the Message deck. Runners who trash an asset on the third or fourth click will be unable to remove the tag inflicted by the ID before ending turn, which significantly restricts the runner's options. However, the three-influence cost is horribly painful for CMT. Adding two of R5 will force you to forgo three of something like Clone Suffrage Movement, Bio-Ethics Association, or Commercial Bankers Group.

There is perhaps some mild synergy with cards like Prisec, Snare!, and Enhanced Login Protocol. In a best-case scenario, an opponent might run your R&D with clicks 1 and 2, trip a snare, trash it and lose a click, then spend the last click to remove a tag. For six credits to rez R5 and pay for snare, you've cost the opponent 3 cards, 2 credits, and one whole turn. But that's a seriously unlikely scenario.

I'd like Ronald a lot more if his credit and influence costs were both two lower.