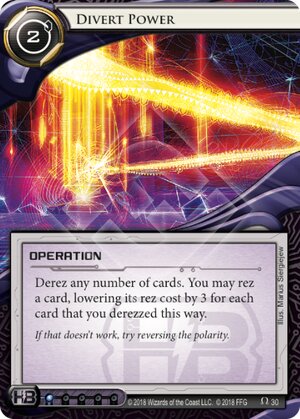 Derez any number of cards. You may rez a card, lowering its rez cost by 3 for each card that you derezzed this way.

If that doesn't work, try reversing the polarity.
Illustrated by Marius Siergiejew
Decklists with this card

On paper, this is a great economy card. We'll see that this is not so simple.

DP costs 2, but allows you to rez anything for 0 (additional costs such as forfeiting an agenda or taking bad pub still apply though). We'll assume here that we only want to rez ice (the most expensive asset to rez in standard is Lady Liberty, and the most expensive ever was The Root; technically you could use this for a SanSan City Grid, 6, and there are two rotated upgrades with cost 6: Off the Grid and Ruhr Valley).

The list of ice in standard of cost 8 or more (for a theoretical max profit of 6) is:

That's 16 ice spread around all 4 factions (and 1 neutral), some of which have conditions that allows the Corp to decrease their rez cost. Let's assume that you rez a 9-cost card. Now, for DP to be worth it, you need to derez 3 cards, preferably 0 cost. What are they going to be? Most assets and upgrades, the runner will trash on sight. If not, they are probably expensive to rez (for instance, a Jeeves Model Bioroids); of course, the story was different when Breaker Bay Grid was around. You can count cards like NGO Front and Rashida Jaheem or even Prisec, but those are cards you generally want to keep hidden until you use them. The best options here would be the known traps (such as a Snare! that wasn't trashed) and annoying assets (like Tiered Subscription, Net Analytics, Nanoetching Matrix, Calvin B4L3Y). Special mention for Spin Doctor, but I'll come back to that later. There are 0-cost upgrades, my favourite is Traffic Analyzer for the best negative interaction.

Then you have ice. There are a few 0 cost ice, notably Pop-up Window, Resistor, and Vanilla (also Aimor, Loot Box, Mind Game, and Rime).

In order to gain 7 credits with DP, you need to have some expensive ice, some combination of very cheap ice and asset/upgrade, and make them stick on the table. This is a very hard sell. Even a more credible gain of 6 or 5 is hard to engineer.

Then, we come to the main issue of the card. Even if you do manage to pull it off: you gained somehow 7. The problem is that the runner now knows what awaits them. See, the strength of Tithonium in an HB deck, it's not only that the runner will have to spend 6 credits with Corroder or 7 with Engolo, to pass it. It's also that they will lose their Bukhgalter if they run it at the wrong time. But if you telegraph what your ice is, they won't run unless that have what they need.

The primary strength of expensive ice is the threat they pose. You might not rez your Anansi now because you want to catch them with 2 cards in hand; Týr because you want them to have one click left; etc. Rezzing such expensive ice should have extra value: they might survive the rez without too much damage, but still end the run because they did not expect the run would be that expensive.

And this is also true with the stuff you had to derez. If you have to reveal that your installed card is a Rashida Jaheem in order to get a 3 creds discount, the runner will have all the information to decide whether to run or not. And they also know where your Pop-up Window and your Vanillas are (you are lucky they ran them!).

The Hidden Benefits of Rezzing

But there are additional benefits that I haven't covered. Derezzing, and re-rezzing is powerful, as we all know (Test Ground).

How can we benefit from derezzing? First, there are hidden financial benefits. Spark Agency: Worldswide Reach makes the runner lose a when you rez advertisements. Indian Union Stock Exchange gets you extra money for rerezzing. Advanced Assembly Lines is an extra 2. Traffic Analyzer can be used when you rerez your ice. Add some Aryabhata Tech and say good bye to your friends.

Recurring credits (Mumba Temple), or money assets (campaigns, Regolith Mining License) are replenished. Even better, we can overcharge some of these taxing upgrades such as Cold Site Server and Reduced Service. If you don't like netrunner, you can also play more Drudge Work.

DP lets you use the special abilities of Spin Doctor and Lily Lockwell.

Derezzing can further charge your Lakshmi Smartfabrics. A really nice interaction is with Malia Z0L0K4: if Malia is already rezzed and a better target appears, you can derez and rerez it.

Jemison Astronautics: Sacrifice. Audacity. Success. could, in theory, benefit from rezzing an Archer during their turn, or derezzing their Quarantine System to re-rez it.

You can also derez your assets (maybe your unprotected daily quest) in order to trigger Wall to Wall.

Believe it or not, there are also bad interactions, such as Urban Renewal (unless you really need to time your bombs 3 turns later). Other funny interactions: Public Support and Rex Campaign.

Ice wise, Ping could be reset. So can Magnet and Masvingo. Gatekeeper too, but it's not that good.

Special mention for rotated cards: Elizabeth Mills and Haas Arcology AI could benefit from it. Mother Goddess was happy to see some cards derezzed.

I notice I forgot to mention a number of sides aspects:

This also combos with Calvin B4L3Y, Nanoetching Matrix, Raman Rai, Vaporframe Fabricator, Whampoa Reclamation. In Eternal, you could also use it to fire twice: Shell Corporation and Midori with An Offer You Can't Refuse.

Comprehensive rules 1.5 explicitly forbids this (clearly overpowered) combo: In 1.12.5, a derez does not change the object, so that derezzing and rerezzing an MCAAP does not allow you to use MCAAP's ability twice in the same turn.