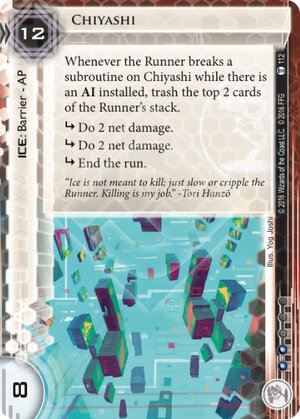 Whenever the Runner breaks a subroutine on Chiyashi while there is an AI installed, trash the top 2 cards of the Runner's stack.

"Ice is not meant to kill; just slow or cripple the Runner. Killing is my job." - Tori Hanzō
Illustrated by Yog Joshi
Decklists with this card

Ho boy this ICE gives me nightmares. It's a nice slap to the face for anyone using spooky scary skeletons or other nasty programs. 12 to rez might be difficult, but of course this ICE shines in the granddaddy of monies: Blue Sun. Oversight this baby and suddenly everything becomes a game of evil tetris. 4 net damage and an etr to boot, this is both serviceable as protection and faceslaps. With the recent addition of other noteworthy ICE like sounds like an NBN card, spiky ball, and Triangles with multiple scary subs, I feel this has a rightful place in any deck seeking to do some damage. Basically, the flavor text says it all: "Ice is not meant to kill; just slow or cripple the Runner. Killing is my job." - Tori Hanzō

For a long time, there were three anti-AI ICE. Swordsman, Turing, and Wraparound. These are all great cards and they thankfully forced Faust users to include regular icebreakers in their decks. Still Faust and other AIs were hard to deal with and won a lot of games. I know I personally wanted more anti-AI ICE. Well, the past few data packs have certainly provided that. Bulwark, IP Block, and now Chiyashi. Bulwark gives the Corp a nice little bonus if the runner is using an AI. IP Block is a bit better, giving a tag to AI toting runners. Chiyashi though, is quite ridiculous. They went overboard I think. Both Bulwark's and IP Block's anti-AI component can be turned off with Hunting Grounds, a card I think all AI decks should include. But not Chiyashi. If the runner has an AI installed, even if they use something else to break the subroutines, they will have to mill the top six cards of their deck! That's over 13% of a typical deck. They can of course let the subroutines fire, but that'll cost them four net damage and an end to the run.

Besides the anti-AI component, this is an amazing piece of ICE. It is expensive to break, 7 for Paperclip, 9 for Corroder, and 5 and two counters for Cerberus "Lady" H1. It's subroutines are brutal; no one wants to take four net damage. It is at least expensive to rez, and with the new (broken?) Anarch console, expensive ICE is risky.

This ICE obviously synergizes quite nicely with Jinteki: Potential Unleashed. If the subroutines fire, that's four net damage and two milled cards. If they are broken and an AI is installed, that's a win for the Corp too.

Perhaps it is time to include Street Magic in a deck or two. There are a lot of nasty ICE floating around now.

(Quorum era)
quailman2101 272
Milling six cards is definitely nice but I think that having 4 net damage on a barrier is the strongest part of this ICE. Between this, code gates like DNA Tracker and pretty much every sentry, running without a full rig can be pretty scary now. — MC729 12 Jan 2017
This is 19 to break with Inti. I saw it happen. — wozzit 19 Jan 2017
It'd be 17 wouldn't it? — quailman2101 19 Jan 2017
This costs 9 to break with paperclip as it has to match strength before it can break subs, just like other breakers. — DGB123 7 May 2017
7 creds with Paperclip is correct. When choosing X = 7 you first crank the strength up by 7 and then break 7 (or less) subroutines as part of a single paid action, unlike other breakers that would use 7 small +1 boosts in rapid succession. — Krams 12 Jun 2017