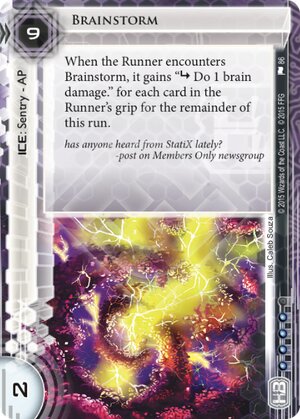 When the Runner encounters this ice, it gains X "subroutine Do 1 core damage." subroutines for the remainder of this run. X is equal to the number of cards in the grip.

has anyone heard from StatiX lately?
-post on Members Only newsgroup
Illustrated by Caleb Souza
Decklists with this card

Basically a brain damage version of Komainu. While intrepid and/or desperate runners would just take the hit from Komainu (or mitigate it with Sports Hopper, Deus X, I've Had Worse, etc.) brain damage is harder to avoid and leaves a much more punishing mark. A careless run can now easily ruin the game for a runner.

Players running Anarch staples won't really feel the burn as much. Brain damage or not, Brainstorm is effectively an HB version of Komainu. It still cracks to Mimic, and can be Parasite'd pretty easily. Worst comes to worst, you can just feed your entire hand to Faust. If none of those tools are on the board, I don't know what to tell you because you decided to run without a rig while the corp had 9 credits.

All said and done, while Brainstorm is quite expensive to rez, it is a piece of ice that can leave the runner for dead. And even if the runner has all the answers, it is still an annoying tax that must be dealt with.

(The Liberated Mind era)
kevo31415 19
Mumbad City Grid? Which supposedly just keeps adding subroutines. — Catsodomy 6 Jun 2016
I feel like you want this on a remote protecting your econ assets, then you stick a Corporate Troubleshooter in there and ruin the runners day. — onehp 8 Jun 2016
This is a frustrating card because HB is all about efficient breakers (and money), but their primary weakness is safe running (since you can just feed clicks into bioroids) — Difrakt 7 Aug 2016
... which is a problem with this card, because now if HB starts with a turn-1 Hedge Fund (when does it not) then you're closed off from running regardless of whether they slotted it or not. Of course nobody is going to actually not run aggressively turn-1 because then HB spams their sex-bot campaigns and makes too much more money, so this card kind of reads 'gamble for a guaranteed 1 shot win' — Difrakt 7 Aug 2016
For the most part I agree, but facechecking becomes less of an auto-lose if you just play a couple of cards first. Taking three brain damage on turn 1 is obviously still pretty devastating, but so is spending 9 credits and leaving one's centrals practically undefended — subochre 27 Aug 2016
Problem is that *playing a couple cards first* takes clicks, which turns on bioroids. — EnderA 4 Oct 2016