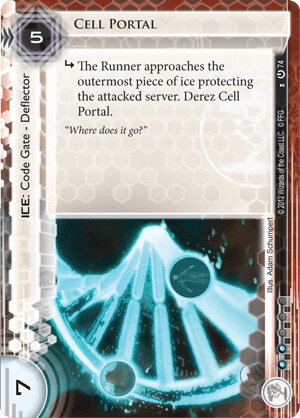 subroutine The Runner moves to the outermost position of the attacked server. They may jack out. Derez this ice.

"Where does it go?"
Illustrated by Adam Schumpert
Decklists with this card

The first piece of ICE in the Jinteki set, it shows off the style that Jinteki will take. Traps, misdirection, shell games. Cell Portal is a quintessential piece of Jinteki theme. Unfortunately, it simply falls flat as piece of ICE.

First, its advantages. As a strength seven code gate, it is very difficult to break. Its subroutine will fire, and will fire often simply because the cost to break for most decoders is expensive, even with only one subroutine. Its rez cost to its strength is lower, which is rare, and while good is that way for a reason. This is a very taxing piece of ICE. Even Torch, one of the most efficient to use (if not install) decoders, breaks it for four credits, which is a hefty tax. That alone could give it some more use than its more comborific effects.

As a lot of early Jinteki ICE was, it is highly positional. Having Cell Portal on the outermost piece of ICE protecting a server is practically useless, unless the corp wants a drain on their credits. Cell Portal is best placed deep inside a server, preferably the last piece the runner will encounter before accessing cards. That way when it fires, the runner will be forced to run the entire gambit again, at the risk of doing it a third time. That means it has to be seen early in the game, or support cards like Tenma Line need to be used to get it there later. If it is the first piece of ICE on a server it is useless to protect against anything, only being a drain if the corp were to rez it. That in turn gives the runner free access to that server.

Its redirect does not force the runner to encounter that ICE, only to approach. This means they have the opportunity to jack out before proceeding (Despite being the first piece of ICE in the server, it is not the first piece of ICE being encountered during a run, meaning the runner can indeed jack out - See Timing Structure of Run, point 2.0-2.2 - This excludes the use of Whirlpool). While this can indeed keep the runner out of a server, there are far cheaper ways to do so than Cell Portal. If the runner was forced to encounter that ICE again it would at least have a taxing purpose or a potential flatline combo, but without that forced encounter, it looses a lot of effectiveness unless paired with even more positional ICE.

Last, but not least, is the fact that it derezes itself, meaning it is a potential huge drain on the corp credit pool, and even though Jinteki economy has gotten much better, a five credit hit is still rather large. Jinteki does have abilities to reduce the rez cost of ICE, but to make an effective Cell Portal ICE server of death and doom, that requires even more cards to add to the combo, making it even more difficult to set up.

Cell Portal has had little impact on the game because of all of these drawbacks. While players often do try to construct the death trap ICE server deck, it becomes very hard to actually get all the pieces in order to set it up, and that makes it rather unreliable. (But if it can be gotten to work even once it is quite rewarding!)

(Breaker Bay era)
lynkfox 381
might begin to see use now with the advent of things like valley grid -As the innermost piece on a ffour ice server, for example, this could make a Valley Grid server very nasty indeed. — badbones777 9 May 2015
You pretty much have to put Akitaro Watanabe on any server using this, and it's still not REALLY worth it (although Komainu+Cell+Watanabe makes a pretty nasty looking server core...) — LordRandomness 3 Jun 2016