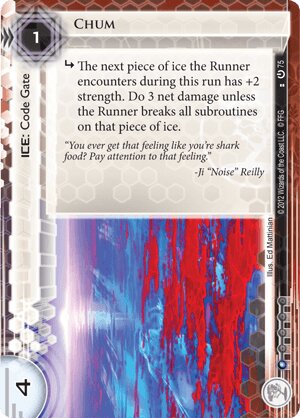 subroutine The next piece of ice the Runner encounters during this run gets +2 strength. When that encounter ends, if the Runner did not fully break that ice, do 3 net damage.

"You ever get that feeling like you're shark food? Pay attention to that feeling." -Ji "Noise" Reilly
Illustrated by Ed Mattinian
Decklists with this card

How can Chum fail?

Chum works well in tandem with cards like Hunter, Snowflake, and Checkpoint. That is to say: cards that have high strength/cost ratio, because their subroutines are flaky or weak. This creates a taxing ice combo.

The great tragedy of Chum comes when you open your initial hand to find it flying solo, unaccompanied with underlying ice. This leaves you to install it as a bluff - probably permanently stranding it. Alternatively, you can try to dig for better ice, but the Chum has taken that card's slot in your deck. You could have Yagura or Quandary in play now!

Chum is also deceptively expensive. You always want it's install cost to be at least 1 credit, and you're also anteing time to install the underlying ice.

Ironically, Chum does work pretty well in front of ... more Chum! It's pretty high strength. Same goes for Inazuma, Sensei, and so on down the line of positional code gate ice. Just beware Gordian Blade - it can slice through the thickest knots of data.

Chum is also strong in Blue Sun - it covers Weyland's natural dearth of code gates. If it's installed as a bluff as the innermost layer, it can be bounced back after the bluff is called. Executive Boot Camp is perfect for this.

(The Source era)
MrWeasely 74
I wouldn't say that the Runner jacking out is a draw. Part of what Chum is, is a deterrent. A pseudo-ETR. Sure you want them to continue into the next piece of ICE and deal the damage, but forcing them to end the run is equally important. Its quite satisfying when they have the relevant Icebreaker already installed and they don't have the balls to continue, playing right into the Jinteki mind games. — Brainteki 8 May 2015
One of my recent favorite Chum combos was into a Pop Up Window. — Brainteki 8 May 2015
Chum is a good early combo with Chimera — tsuruki23 15 May 2015
Does the 3 net damage fire if the runner jacks out before encountering the next piece of ice. I think an argument can be made either-way. — chris_walker 23 Nov 2015
First thing first: Chum is a code gate with strength 4 and only 1 subroutine, so it will be always fairly enough breakable no matter how good its effects are. Second: Yes I don’t have nothing better to do than make absurd abstract arguments and write them down here :p Third: In the following I will make use of math’s kind of logic. That said let me share my opinions about chris_walker’s question which may appear trivial but is not. My first assumption is that the golden rule implies that every card’s text is TRUE unless another card’s text specifically denies it (i.e. damage prevention effects). That can be equivalently stated as every card’s text is NOT FALSE unless proven so by another text. The first sentence of Chum’s subroutine is “The next piece of ice the Runner encounters during this run has +2 strength.” I read this sentence as an implication like: “(IF) The next piece of ice [[let’s call it A for further reference]] the Runner encounters during this run (THEN) has +2 strength”. Why do I read it so? Because if it is read as an implication such sentence is logically always TRUE, hence it respects the golden rule, while if it was a statement it could be false whether for example the runner jacks out, going against the formulation above of the golden rule: the text is NOT FALSE unless proven so by another text, instead here it would be made false by the runner’s action and not another card’s text. The second sentence of Chum’s subroutine is “Do 3 net damage unless the Runner breaks all subroutines on that piece of ice.” Which can be formulated as “Do 3 net damage unless the Runner breaks all subroutines on [[A]].” Which equivalently can be formulated as “IF the runner does not break all subroutines on [[A]] then DO NOT 3 net damage” but this last implication must be TRUE for the golden rule therefore if the hypothesis “the runner does not break all subroutines on [[A]]” is true then the thesis “DO NOT 3 net damage” MUST BE not false therefore its negation “DO 3 net damage” must be true. But when the hypothesis “the runner does not break all subroutines on [[A]]” is true? It’s true if A does not exist (and it may happen for two different reasons being the runner jacks out or Chum is the innermost ice protecting the server) or if A exists and the runner does not break all its subroutines. Bottom line if Chum’s subroutine fires the only way the runner has to avoid 3 net damage is by encountering a following ice and break all its subroutine P.S. This is my first comment on this site, hope I’ve been if not interesting at least thought provoking :-)… — J0112358 23 Nov 2015
I'll play: — raphe_nuclei 17 Dec 2015
I think we need to further inspect the proposition that '“the runner does not break all subroutines on [[A]]” is true if A does not exist.'. If A does not exist, then there are no unbroken subroutines on A. The runner therefore has broken all subroutines (all in this case is zero). (A similar argument would apply if Chum were installed in front of a piece of ICE with no subroutines). — raphe_nuclei 17 Dec 2015
What Brainteki said up above is totally true - Chum should be thought of as Jinteki's Data Raven. It gives the runner a chance to jack out due to scare factor, and can sometimes punish them horridly if they power through it. As it happens, a Chum in front of a Data Raven is a fun synergy as well. — beladee 27 Jan 2016
I can't help but want to play Chum in front of the likes of Pop-Up Window or Pachinko. These suddenly require you to have the correct ICEBreaker. — Asurya 1 Nov 2016