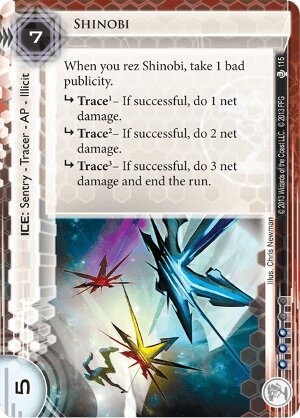 subroutine Trace [3]– If successful, do 3 net damage and end the run.

Illustrated by Chris Newman
Decklists with this card

Shinobi should be viewed as an alternate win condition that masquerades as an ice. Its existence on the field, rezzed or not, requires that the runner play carefully.

Jinteki ICE has been called "porous" more times than it's been played. This trend continued with their tracer ice Shinobi, which had the unfortunate side effect of being illicit as well. (For having both tracer and illicit, it does seem overcosted by 1). However, without manipulating handsize, a single trigger of all three traces will win the corp the game.

The math for getting all traces to fire is simple enough. Think of all the runner's link and credits as a stack of tokens. You want your trace strength to be higher than that stack by one. So, to get all traces to fire on the turn you rez the card, you'd need 7 credits to rez the card, plus x, x-1, and x-2 credits, where x is their link plus credits. (Ignore any negatives.) So to get all three traces to fire, you'd need 8 credits if they have 1 link/credit; 10 credits if they have 2 link/credit; and 4+3x otherwise.

This, however, is the worst use of this card. Jinteki has plenty of cards that deal damage or makes runs with a large hand more painful, such as Komainu, Neural Katana, Tsurugi, and Psychic Field. The runner, to keep his entire turn from turning into a draw-fest, will likely be running with 4 or fewer cards in hand, in which case, the first subroutine becomes unimportant. The math switches to a more favorable 4+2x to flatline the runner. At 2 cards in hand, it becomes 5+x. If they have to spend credits to beat the first two traces, all the better.

The runner, of course, could always break the subroutines on Shinobi, with enough credits. This is fairly expensive. As of the time of writing this, the cheapest way to break subroutines is via Deus X; which works a single time, or via Faerie for 3 credits a single time. If the ice is being run in Jinteki, these cards should be used by the runner regularly, leaving you with programs like Ninja or Mimic, which require more resources. This ice, then, is better suited being played behind "positional" ice, like Inazuma or Chum, to make the runner spend resources or else strengthen Shinobi. As such, this ice is a very unlikely splash, though NBN: Making News may try for it.

Much has been made over the bad publicity the ice gives out while rezzed. Remember that the BP, though instant, won't give the runner credits in the middle of the run, keeping the math in the corp's favor. In general, rezzing this should only come at the end of a runner's life, since BP is wildly anti-synergistic to a tracer ice. A deck with Clone Retirement might want to bring it online early, but I've found the uncertainty between Komainu and Shinobi useful in dissuading runs.

The best card to compare Shinobi to is Scorched Earth. Both cards set up alternate win conditions for the corp, and both can lead to a sudden win out of seemingly nowhere. But both are undercut by careful runner play. Scorched Earth is typically played against with Plascrete Carapace and both players deftly maneuvering around the possible play by manipulating tags. Shinobi, on the other hand, requires the correct number of credits, cards in hand, and a run on the correct server. As such, the placement is key--putting it on a scoring server often means the runner is forked between losing points and losing the game. And, without expose effects, the runner often doesn't even know it.

(All That Remains era)
hatman 174
It gonna cost faust 5 cards to make break through it — kinohung 16 Aug 2015
I'm using this 1-off in casual NBN: Making News trace-heavy deck with Rutherford Grid, Improved Tracers and Surveillance Sweep. It can be a nasty surprice for the runner and it gets worse if another 1-off, TL;DR, happens to be in front of it! — Tasku 28 Jan 2016