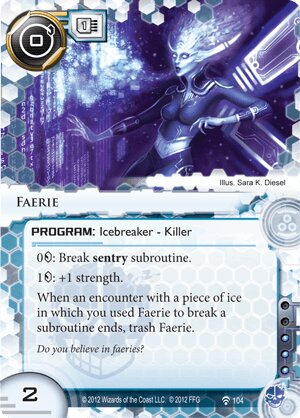 Whenever an encounter ends, if you used this program to break a subroutine during that encounter, trash this program.

Do you believe in faeries?
Illustrated by Sara K. Diesel
Decklists with this card

An extremely strong card. This fits very well with the Criminal playstyle, since it allows for almost unparalleled early aggression. On turn one you can slap this on the table and run without much fear, since any sentry that you encounter you'll be able to deal with easily, and there aren't many threatening code gates other than Merlin and a few others. It doesn't stick around, but after it leaves you can install your main sentry breaker like Femme Fatale or Mimic -- plus, it only requires a click to draw and a click to play, so losing it isn't too bad. It can also do pretty well in a Shaper deck, since they have so much recursion, but at the same time 3 influence is hard to make room for. Overall, one of the best one-shot breakers out there.

(Breaker Bay era)
AwkwardPizza 64
Another great review :) It's too bad you aren't putting card links in these reviews, they deserve them! To make these, just type hash # before typing a card name, and choose it from the pop-up list once it appears. — Ber 27 May 2015
3

I just wanted to throw it out there that criminal decks often want to play a bunch of single copies of breakers and Special Order for them. This fits pretty well with that. You can play 3x Faerie and 1x each of actual breakers along with the 3x Special Order and maybe you don't have to use the first special order on a sentry breaker if you really want something else to push the early game aggression.

Also, now that Baba Yaga is out, this isn't bad at all as a card to throw on it. You can have all the benefits and none of the drawbacks.

Even if you have another sentry breaker out, Faerie has some utility as a second possibly lower cost sentry breaker if you have a free MU. Faerie gets around Archer for 4 and that's as good as it gets in this game outside of stealth. That potentially lets you be even more aggressive. This gets around Brainstorm for 0 also, which can be a pretty wreck you card sometimes as well.

Also has some utility around Mongoose for doubled up sentries.

Not great that you have to draw it and play it and it costs an MU, but it's exceedingly good early game protection for your game plan and will prevent you from most ways to lose the game on turn 1. Not bad for a zero coster.

(Quorum era)
Raiddinn 55
faerie used to be an immediate three of in my crims decks, but slots are so tight! — RoRo 20 Jan 2017
Am I missing something? After 1 subroutine and she gets trashed. Can't be good if shes my only Icebreaker — Kutpurse 8 May 2017